In which we discover that trees have a dark side, that they occasionally attack livestock and that they sometimes assist river spirits in sacrifice. We also learn that there can be hope in little things, that Grannies really do know everything and that divining the name of a future spouse can be trickier than you’d think.

Darkness Amongst the Trees or A Feast of Divination
byRachel Mosses

What did you think of our dark tales? Did you enjoy the tree connection? I know the Flight of the Birds isn’t a traditional scary story but it is so dark and brings out the scariness of the stormy, windswept night-time forest and the fear of being all alone with a persecutor in a lonely place. The really terrifying element of the story is being at the mercy of someone who should love you but thinks that love means they own your life and by extension of that ownership can simply choose to take life away.

Hope in the Little Things

The birds show that there can still be some hope and even small helpless beings can band together to protect another vulnerable life. The fact that dawn breaking is enough to stop the terror is one thing this shares with more traditional scary stories, light brings salvation from the terrifying things that happen in the dark. I have read two versions of this tale, one collected by Katharine Briggs and one told by Lisa Schneidau and although my version of the tale is closer to the collected version I have adopted Lisa’s ending. I felt the uncertainty was a fitting ending for a such a frightening tale.

Terror in the Trees

Crooker is another dark tale of the English countryside, another example of how the quiet, gentle natural beauty of pastoral surroundings can quickly become a different, more dangerous world as soon as the sun goes down. There are so many folklore references in this tale that I genuinely don’t have room to mention them all so I’m going to stick to three. I’m nothing if not traditional when it comes to numbers.

Dressing in Green Should Never Be Seen

I’ll mention the ash tree momentarily but I also wanted to quickly reference the dress of the women who helped the traveller and the relevance of the plants in their posies. The reticence of the traveller to speak with the first old woman comes from his belief that she could be dangerous and to stay silent is a form of protection. He thought she was potentially dangerous because she was a fairy and he identified that from her green dress.

The Elder Tree Witch is another interesting one and although it involves some pretty dark and gruesome undertones, it at least has a little levity. It also brings home to us how much damage could be done to a farm from theft and low milk yields. In a rural economy anyone who damaged livestock was a massive threat to the farm’s income and thus to the lives of the the farmer and his family. The Granny is winderful though. There are some interesting folklore themes in this story especially around the elder tree and again the ash tree so its probably time to address those now.

Lets look at the Elder Tree first, it very much has a dual nature, considered both a poor man’s medicine chest for the amount of folk remedies that can be derived from its fruit, flowers and bark, a witch deterrent as well as a tree that could shelter a witch! It also supposedly offered protection from lightening because it was considered one of the woods that made up the cross at the crucifixion.

It was believed that if you cut an elder tree it would bleed. It was also not to be used for firewood, usually because it was considered to invite the devil into your house. Although possibly it was because elder spits and screams as it burns due to the sap in the wood. It was also believed in Somerset that Elder could not be destroyed unless it burned. There are some experts who believe that the elder was essentially given bad press in order to discourage because many of its uses came from its pagan roots.

Ash is another interesting tree although it is unusual to see it as an incarnation of evil. It is usually thought to offer protection from evil and witchcraft especially in the form of an ash faggot for burning as in the Elder Witch tale or in tools used for caring for farm animals. It is thought to be a lightning tree as it was the tree that Odin hanged himself in his pursuit for wisdom. It was linked to safe childbirth and the promotion of childhood health.

It was also considered to be the best wood for getting rid of snakes and healing snake bites. Children could also be passed through the trunk of an ash to clear whooping cough or other childhood infirmities. They were only considered ill-omened when they were a barren tree as in the case of Crooker.

I wish I could spend longer examining the folklore in these stories. It is absolutely fascinating about what these tales have to tell us. However as I promised you some food folklore about halloween I sadly don’t have the time.

Lets look at our first delicious seasonal food: Colcannon, an Irish recipe traditionally eaten on 31 October, It’s a mixture of kale or cabbage and mashed potato, with butter and milk. Don’t hold back on the butter. Some people add scallions and or leeks. The first known written mention of it was from a diary in 1735 by a Welsh traveller to Dublin. It became popular in the UK too, see recipes from Margaret Dodd’s Cook and Housewife’s Manual in 1826 and Eliza Acton’s Modern Cookery in 1857 as well as the appropriate Irish way to cook potatoes for the best results.

That’s history you say, where’s the folklore? Well, did you know you could tell fortunes with Colcannon. At Halloween the dish contains a ring & a thimble. If you get the ring- marriage to the person of your dreams within the year; if you get the thimble then there is no wedding for you, at least in the next twelve months. You could also put the first and last bite in a stocking and hang it on the door. The next man through the door would be your husband. If you have a hawthorn tree handy, you can also leave a bowl as an offering to the faeries. 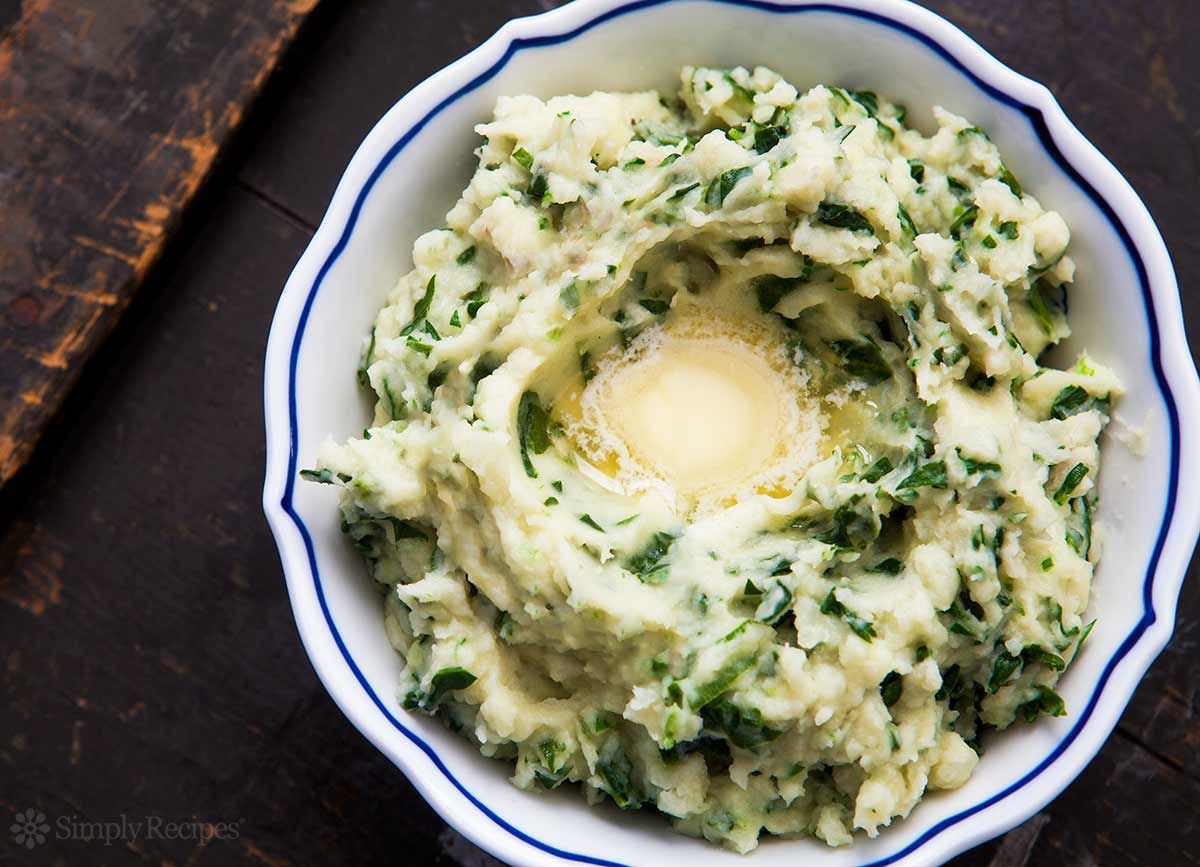 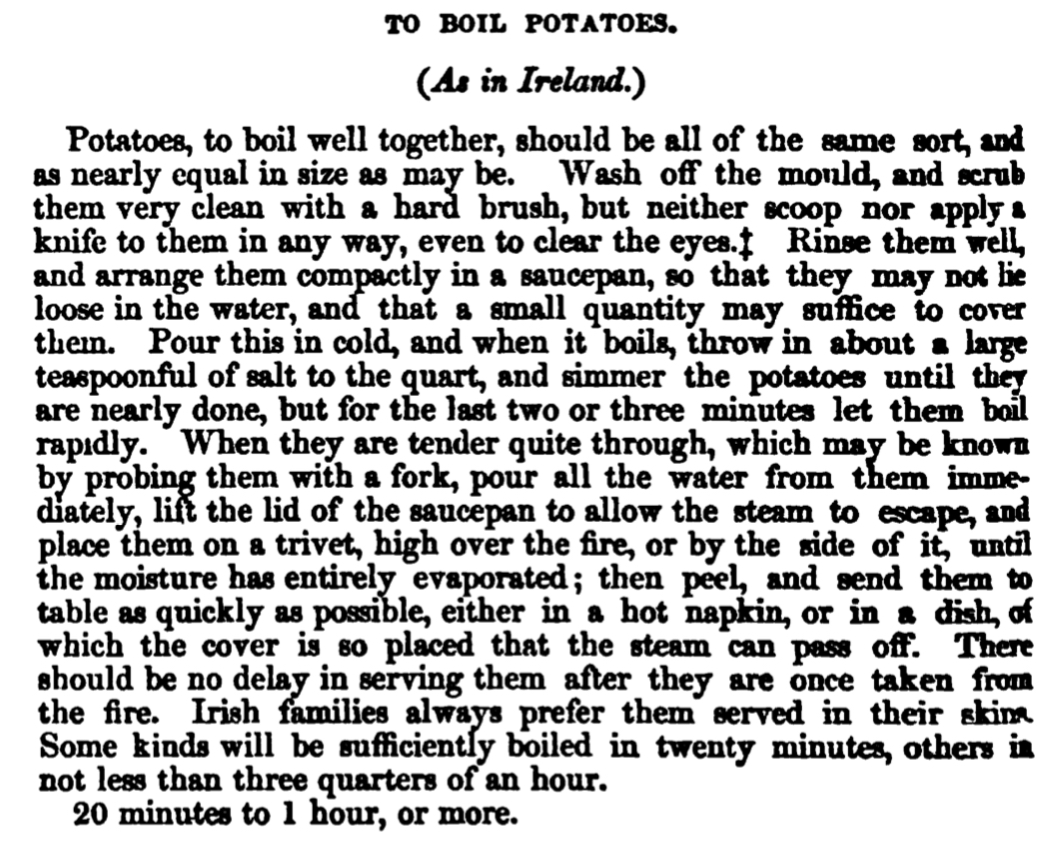 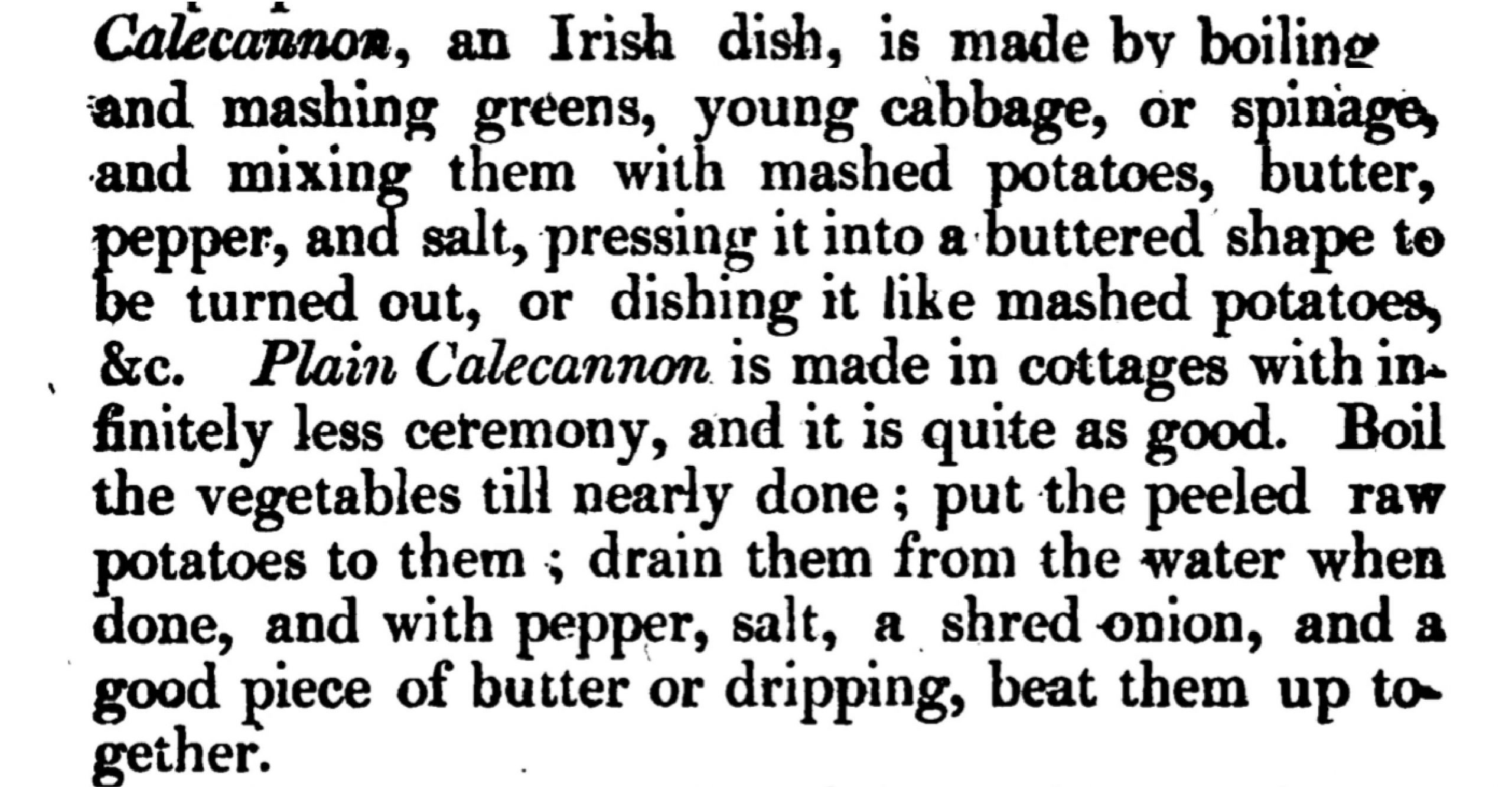 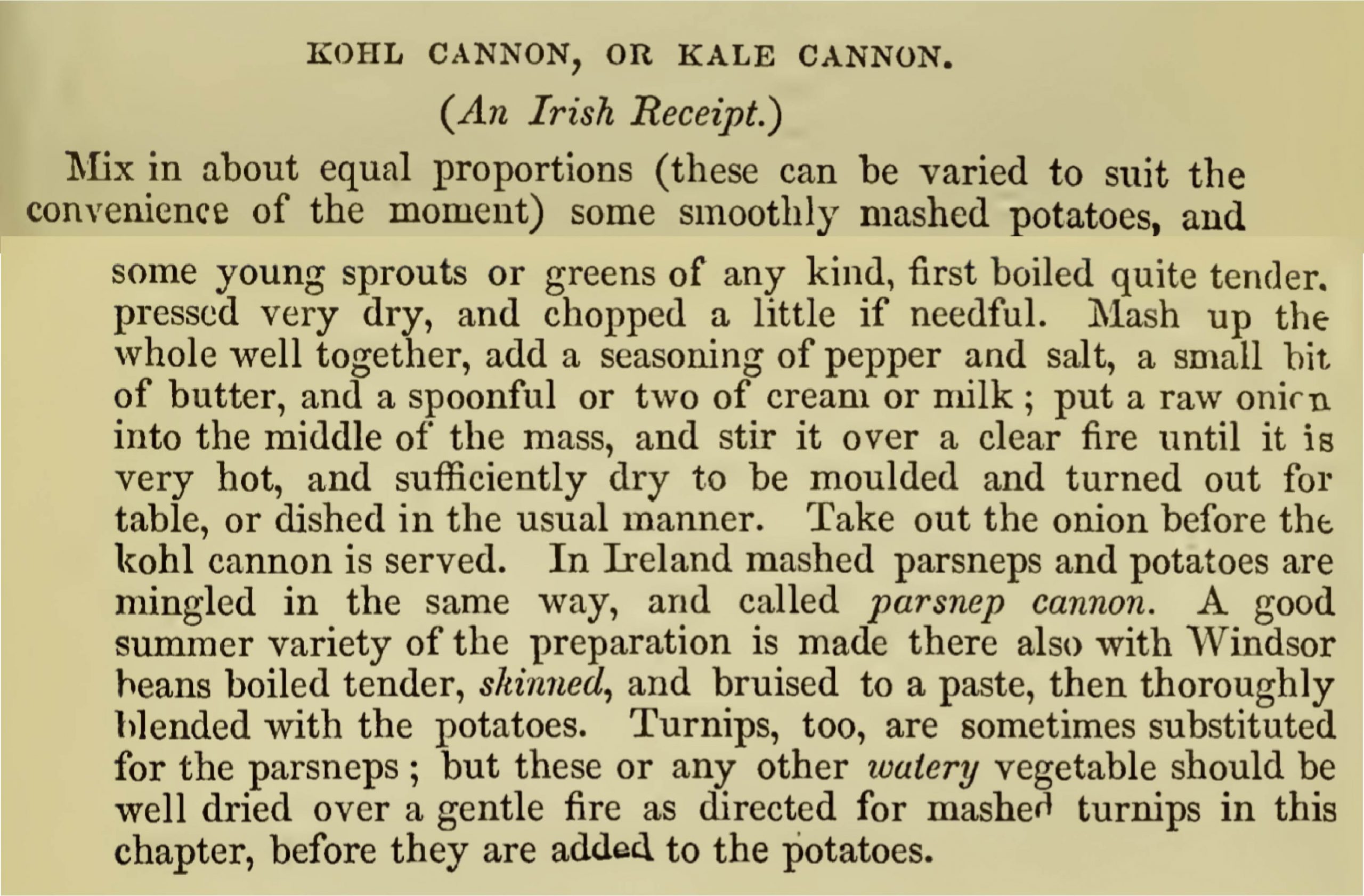 Fire Amongst The Walnuts

Our next season ingredient is nuts: nuts, walnuts specifically. I’m not going to give you a long history but safe to say they’ve been around for ages. They’re in season between Jul-Nov & have some interesting folklore. The first concerns Nut-Crack Night which is celebrated in Scotland & Northern England on 31 October – A pair of nuts are named for each member of a couple, then placed on a fire. The couple then say the rhyme ‘If you hate me spit & fly; If you love me burn away’ If they burn to ashes, the couple will have a long and happy life together; but if the nuts spit & roll apart, they will separate soon.

These could have been any nuts available really but walnuts are good for rolling! They were eaten regularly but with unpredictable crops were more likely to have been harvested green and pickled or used for cordial waters to avoid wastage. They were also stored for future use, as you can see from these recipes from The English Art of Cookery (1788) & The Complete Housewife (1773). However I thought these recipes for Walnut Tablet and Date & Walnut Loaf were more suitable for modern celebrations from Glasgow Cookery Book (1910) You can relax, eat & pop some nuts on the fire ……… 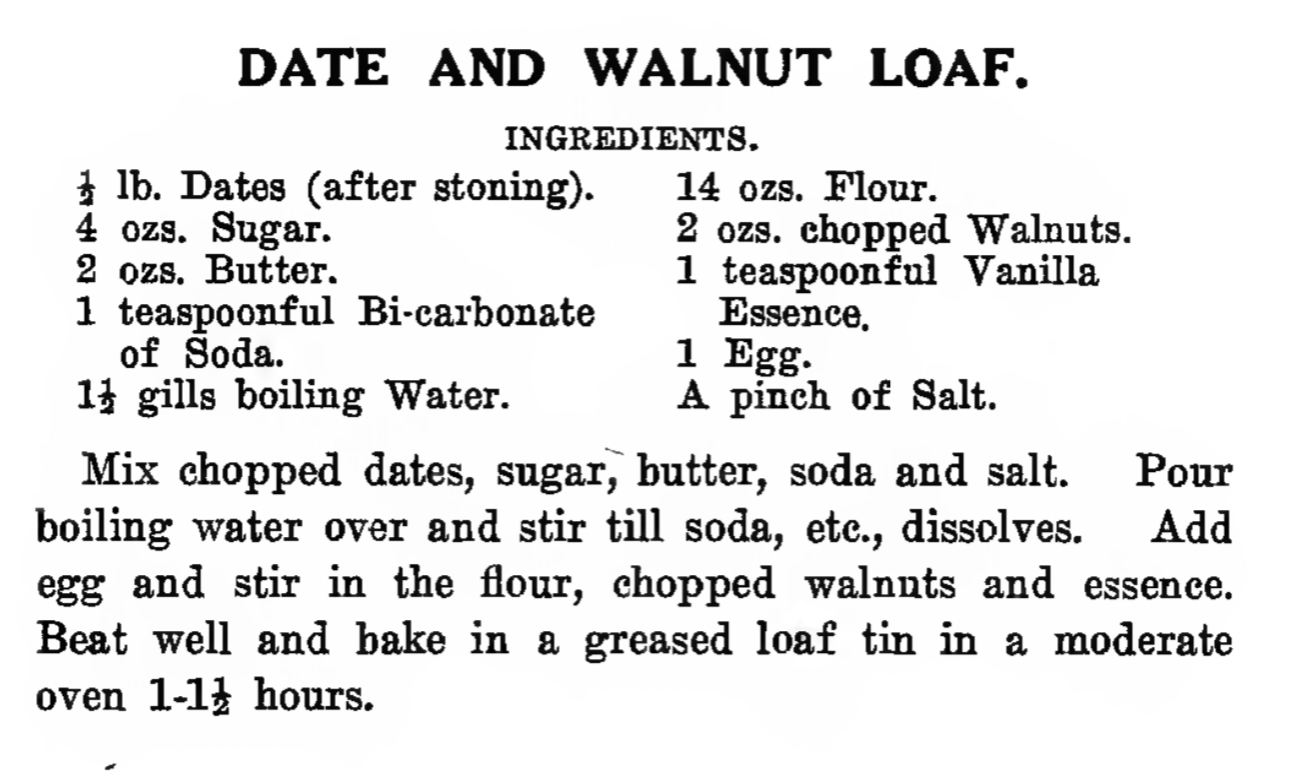 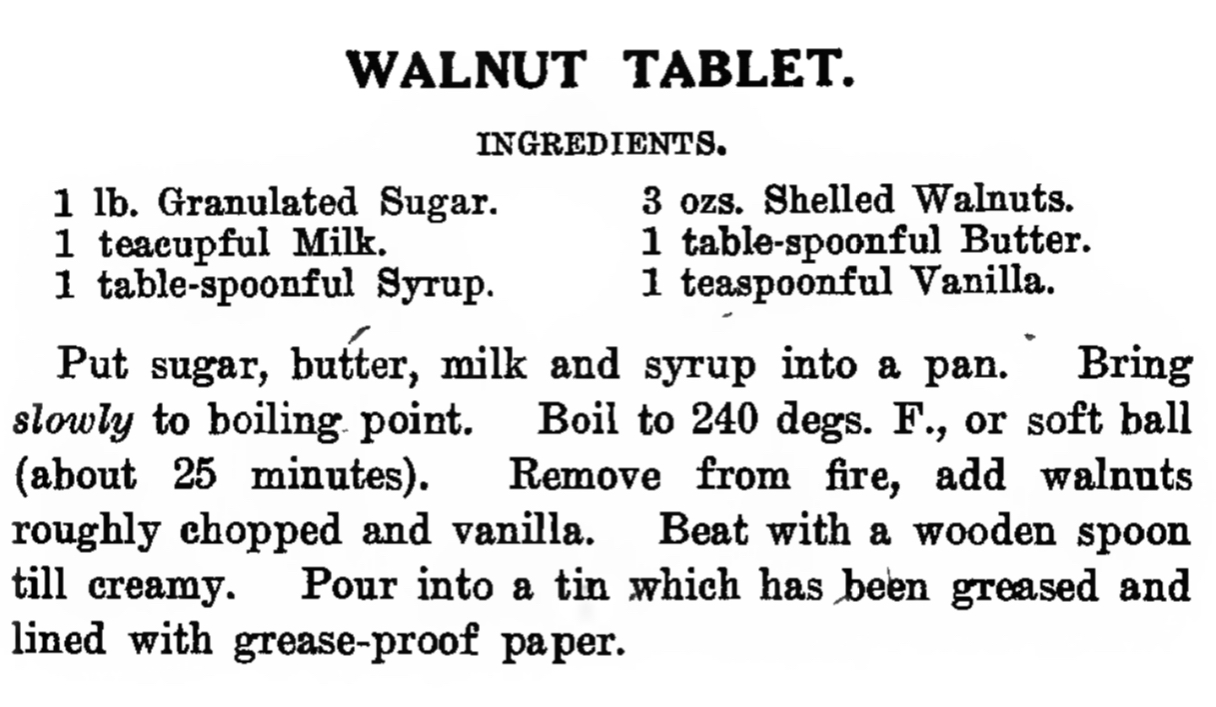 Our final seasonal food is soul cakes, these cakes were originally baked for beggars who would promise to pay for those souls in purgatory on All Souls’s Day (2 November). This was largely suffocated as a custom in England when the church split from the Catholic Church in Rome. The custom did continue, if only in a form of remembrance for the dead rather than actual praying for souls, in those areas further from authorities in London in Wales, Midlands and the North although it morphed into groups of men who performed Mumming plays and then even further into groups of children who went house to house singing rhymes to get soul cakes or in the case of some areas, fresh fruit.

This was known as souling. There is an excellent article in Folklore from 1914 by Charlotte Burne who talks about these customs in the West of the Midlands. The article also includes tales of Clementing and Catterning with similar rituals celebrating St Clement and St Katharine’s days later in the month. The article also connects the celebrations with the old financial practices of communities where accounts were settled at the end of October.

With Thanks to Farmer’s Wives and the WI

I don’t have my own recipe for Soul Cakes but perhaps you could adjust this one from ‘Country Dishes’ edited by Barbara Hargreaves, from the introduction: “… traditional Farmhouse Recipes from counties of Great Britain compiled by Suzanne Beedell from a host of recipes collected from farmers’ wives … also contributions from [earlier publications] County Federation of Women’s Institutes and Farmers Weekly … recipes handed down to them, and which they have proven. Thanks to all those who have preserved them.” These recipes were first published in 1962, with local and regional recipes handed down in families and dating from the 1800s.

Flight of the Birds – collected by folklorist Katharine Briggs