In which we discover that cherries can restore your wealth, spiders can be the reason for miracles, mulled cider can result in treasure and that trifle is devoid of folklore. Christmas Pudding, however has plenty to share.

This is the fourth of four seasonal story and festive food related episodes to take us through December and lead us to the big midwinter celebration of your choice. I hope you enjoy the slightly different focus. I will again let today’s story to speak for itself and allow it to weave its seasonal magic spell.

I must start by confessing that this isn’t only just about trifle. I truly wanted it to be but I hadn’t considered the complete lack of folklore connected to trifle. There are no ceremonies, not one. Its not mentioned at any important occasions, it isn’t even just a Christmas dish although it is closely associated. It does have a good long history though so there is that. So I needed to bring in another traditional festive food to add the touch of folklore that this season demands. I bet you can guess, you’re right its Christmas Pudding.

I’ll start by saying that I love Christmas Pudding and enjoy making one. However, I have absolutely no intention of making up my own recipe. I use Nigella’s recipe and i would recommend it to everyone, I always get compliments. We don’t even have a family recipe for it. As far as I remember my Nan brought hers, it just doesn’t appear in my Christmas memories. Mum has been known to make one but I’m pretty sure she used a Delia recipe. I sometimes make her one and she buys one the rest of the time. Trifle, however we have lots of lovely family memories about, so I think I’m still justified in talking about it.

So we’ll start with Christmas Pudding and its folklore and history. Did you know that the mixture should contain 13 ingredients to represent Jesus and the Apostles? Also that the holly on top represents Jesus’s crown of thorns? Me either. It seems a lot of symbology to something that only became associated with Christmas in the 1830s. There had been Plum pudding and boiled pudding prior to this but they didn’t receive the name of Christmas Pudding until then.

The Charms of Christmas Pudding

Anyway I’m getting ahead of myself, Christmas Pudding comes from a dish much older than that, which we’ll get to shortly. However we have some more folklore to get to – the charms. These seem to have come across wholesale from the 12th night cake which wasn’t possible until the pudding became the more solid format. We really lost the 12th night cake then, although it still appears as what we now call Christmas cake.

The charms are usually silver charms which suggests the yearly outcomes for those receiving them with their portion of pudding. A thimble meant spinsterhood, the button meant bachelorhood, the ring a wedding, a horseshoe for good luck and a coin for good fortune. This still remains as a custom in some families now who just include a silver sixpence.

The remaining folklore around the pudding is that everyone present in the household when it was prepared should take a turn to stir the pudding and make a wish before it is boiled. The pudding should be stirred east to west (you knew that compass app on your smart phone was useful for something). This is in memory of the Magi and the direction of the journey they took to visit the Christ child. This usually happens on Stir-Up Sunday. The name comes from the collect that appears in the Anglican service on the last Sunday before advent which starts ’stir up we beseech thee O Lord’. Its not named after the pudding ceremony sadly but the two became connected in the Victorian period.

So to history, even for food history this is a bit of a tricky one. We can probably say that the dish we know as Christmas pudding evolved out of a fruited spiced wheat porridge which dates back in some form to Roman times. The first mention of Stewed Broth appeared during the 15th century (1420) and gained the prunes (plums) during the Elizabethan period. I’ve mentioned before these were so popular that they became the shorthand for most dried fruit even if later versions didn’t contain any. There are recipes for Stewed Broth with alcohol added 1596 and by 1660 Robert May is suggesting a version with wine and sugar added form part of the menu for Christmas Day as a starter. The latest recipe is from Hannah Glasse in 1747. It formed part of the first course of the feast. 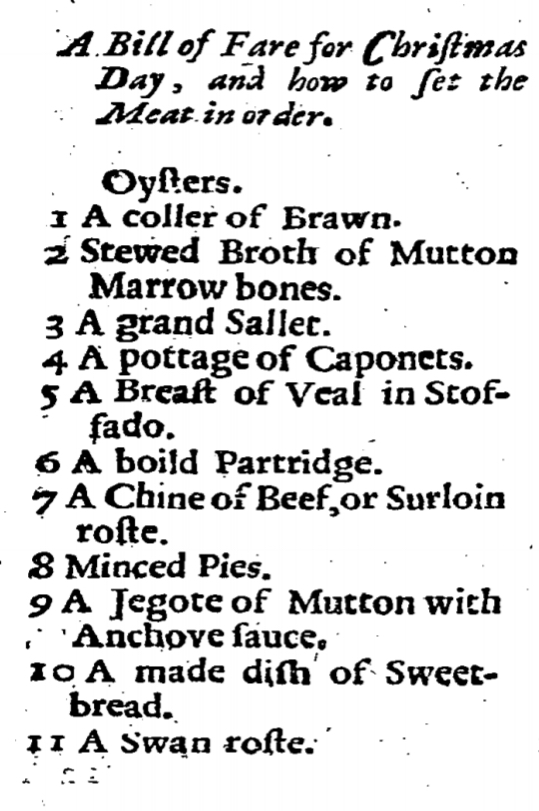 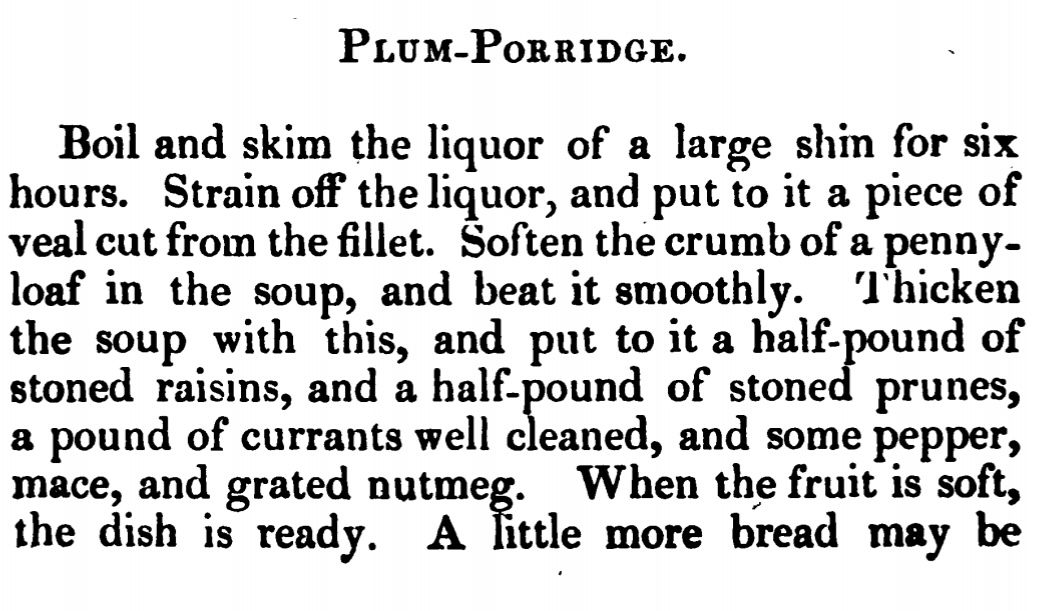 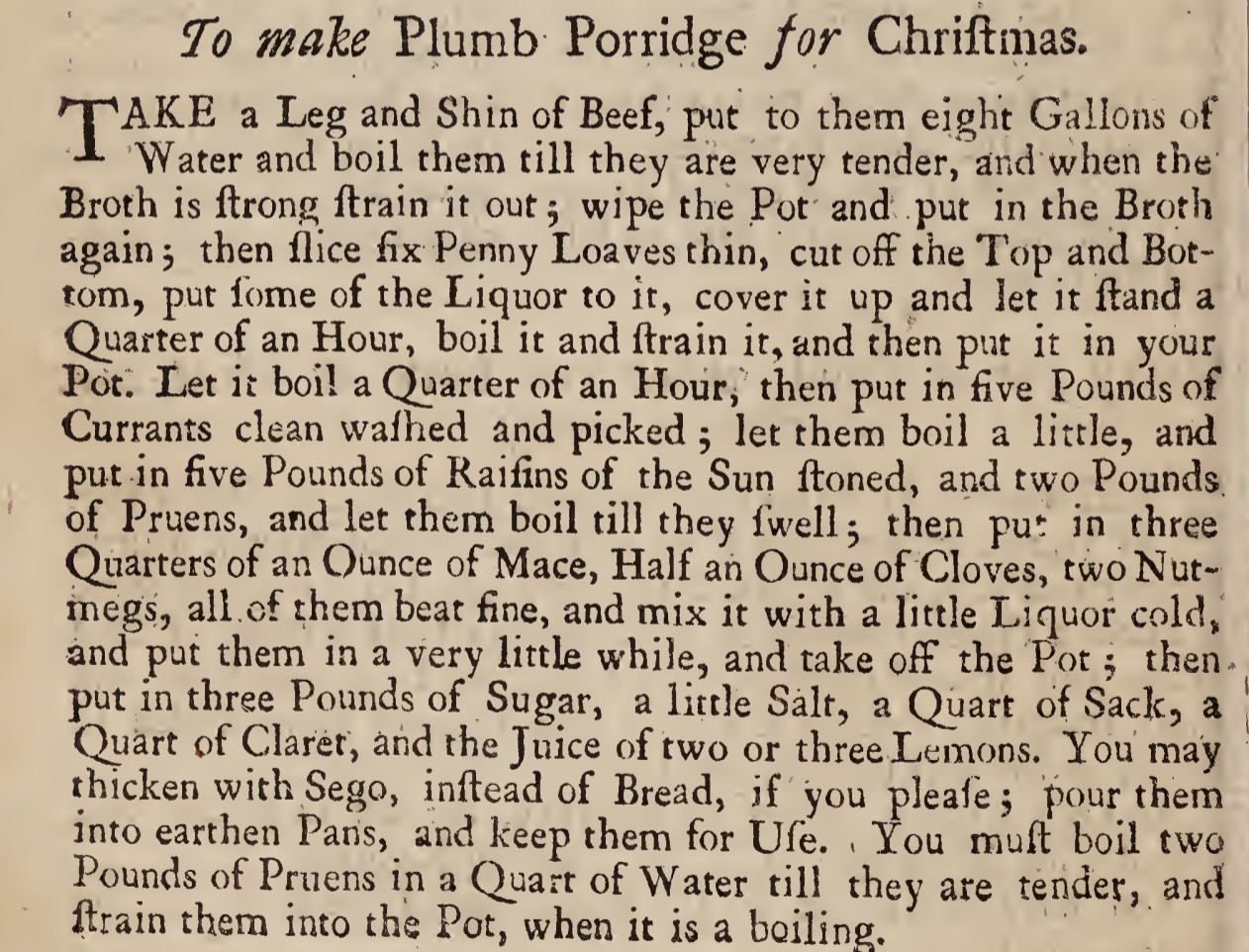 E Smith does not include it in the 1773 Version of the Complete Housewife but there is a “Good Boiled Pudding’ which bears a strong resemblance. In 1810 Maria Rundell has a Plum Pudding which is very familiar. Margaret Dods had both a Plum Pudding and a Superfine Plum Pudding in 1826. By 1845 Eliza Acton is calling her recipe ‘Christmas Pudding’. The Pudding had moved firmly into its current incarnation, course and even Nigel Slater bases his own recipe on Eliza Acton’s. 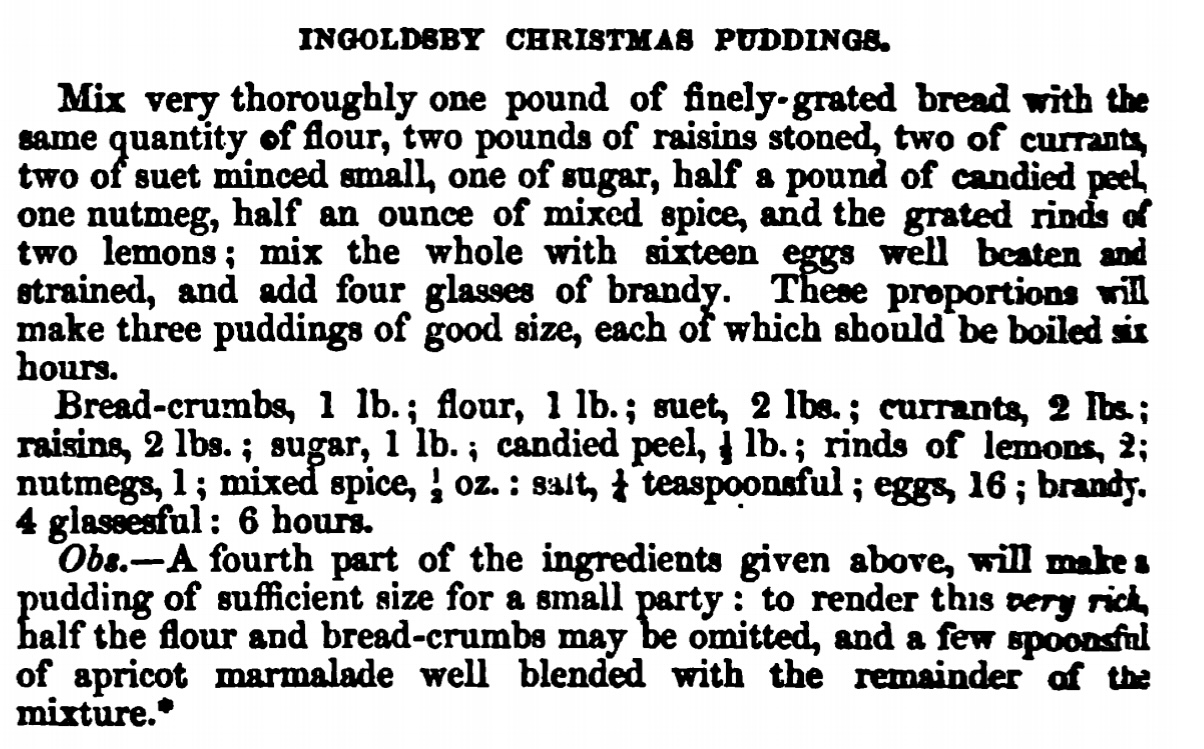 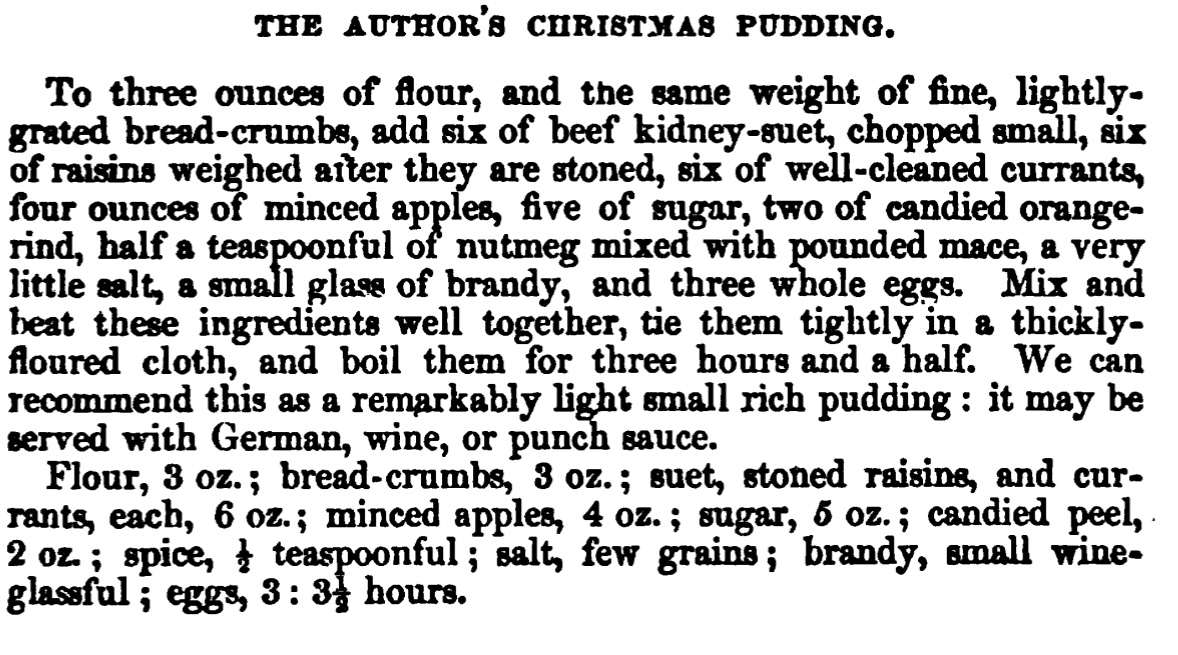 The tricky part comes from the fact the first plum pudding recipe in a familiar form dates from 1604. This however was boiled in something less savoury than a pudding cloth. This was from the Receipts of Eleanor Fettiplace and it does suggest that the plum pudding was also being cooked by others around that time. There is a nearly 200 year crossover period where people were eating both.

The Pudding as Charles Dicken’s mentions it had become popular because it could be said to epitomise Christmas. Most people could afford to make one as the ingredients were not expensive. The form of cooking was also available to most. It was also an excellent way to fill up those whose Christmas main course was less than stellar. Dickens himself promoted it as the spirit of Christmas for that reason.

One more Christmas Pudding related fact: the dish proved so popular in the Devon village of Paignton that its citizens concocted a giant, communal pudding in 1819. It contained one hundred twenty pounds of raisins, an equal amount of suet and four hundredweights of flour. When finished, the enormous pudding weighed nine hundred pounds. You’d struggle to do that with trifle.

So that’s a very brief guide to Christmas Pudding, folklore and history and we can happily move on to trifle. Firstly where does the word come from, it is believed to come from the Middle English trufle. This in turn comes from the old French trufe which means something of little importance. It is also possible that its connected with fool, another dessert of whipped cream and fruit. In historic recipes the two terms can be interchangeable.

A Syllabub or Two

I love trifle and its older than I supposed, the first recipe appeared in the Good Housewife’s Jewell but its more thickened cream than the layered confection we know today. It acquires thickening with rennet by Hannah Wooley in 1670 but it is agreed that the first recognisable recipe was in 1751 by Hannah Glasse where she introduces the top layer of Syllabub. Syllabub at this point in time was a whipped mixture of cream, juice, fortified wine and sugar. Doesn’t that sound wonderful? 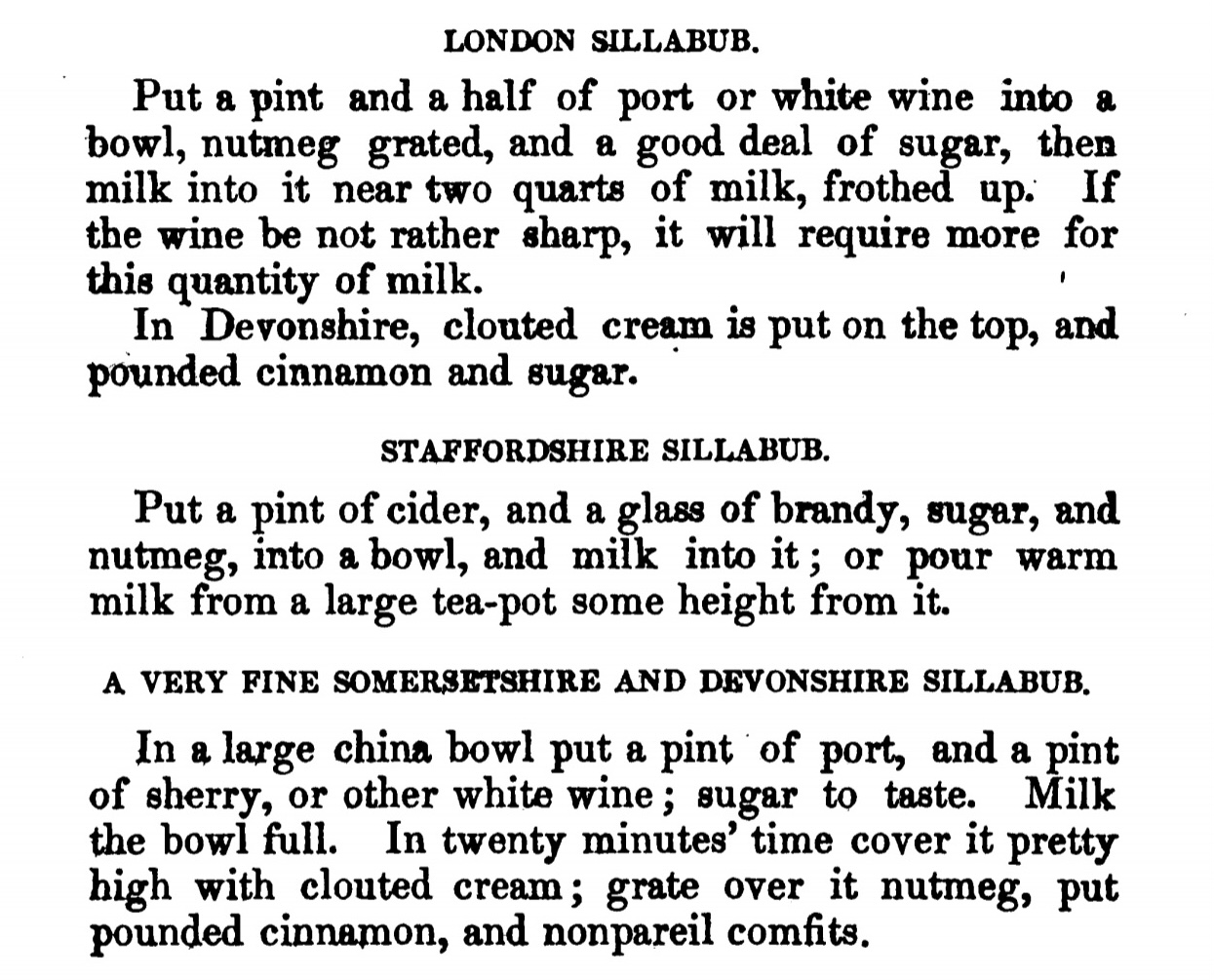 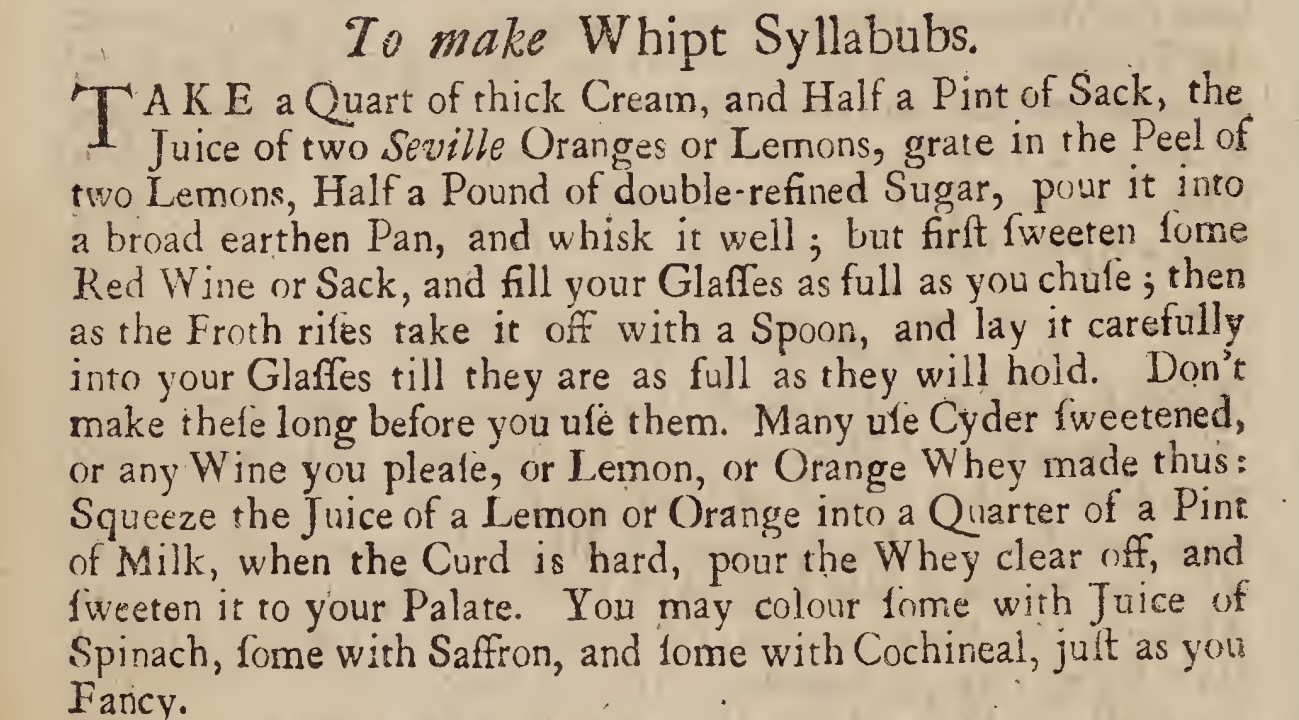 The recipe appears in several books after 1751 and s eventually whipped cream froth does replace the syllabub although it often enriched. There is even a recipe in 1773 which contains jelly. Jelly is a bit of a contentious subject when it comes to trifle. Originally trifle would have been served separately from jelly which would have been formed in wonderful moulds and shapes however it clearly sometimes appeared in the trifle although it wasn’t common in recipes from 1829, 1842 and even Eliza Acton in 1860.

Fruit does appear though although sometimes in the less elegant version of the recipe as in Maria Rundell in 1810 who has recipes for an excellent trifle and a gooseberry or apple trifle. She also mentions a jelly layer in her 1842 addition but suggests it is old fashioned and can be omitted although ‘on no account should you omit any other ingredients’. I don’t like jelly in my trifle and many trifle purists agree but you can’t say it doesn’t have a history. 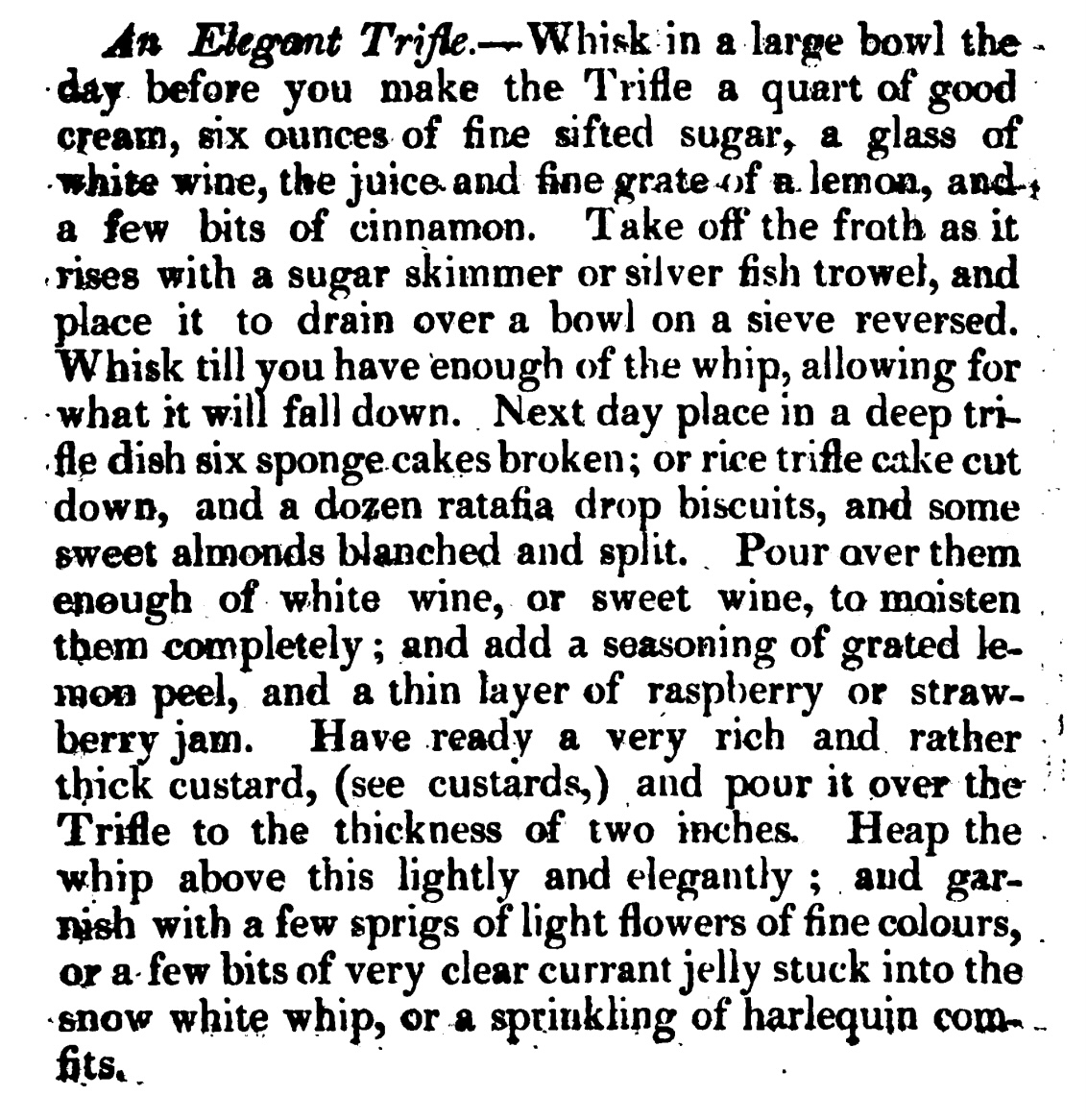 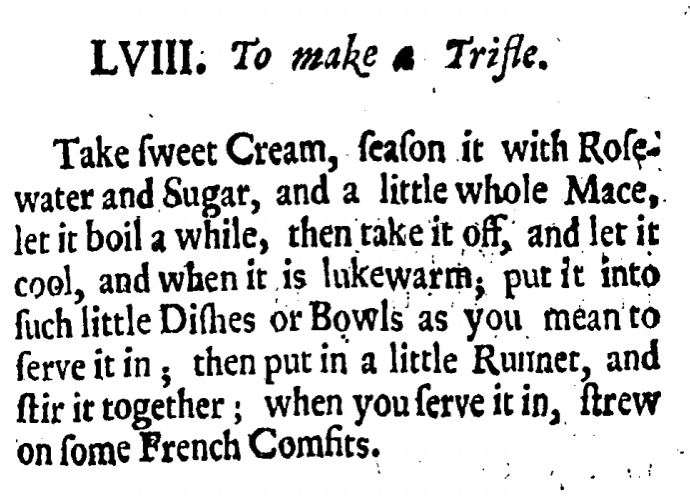 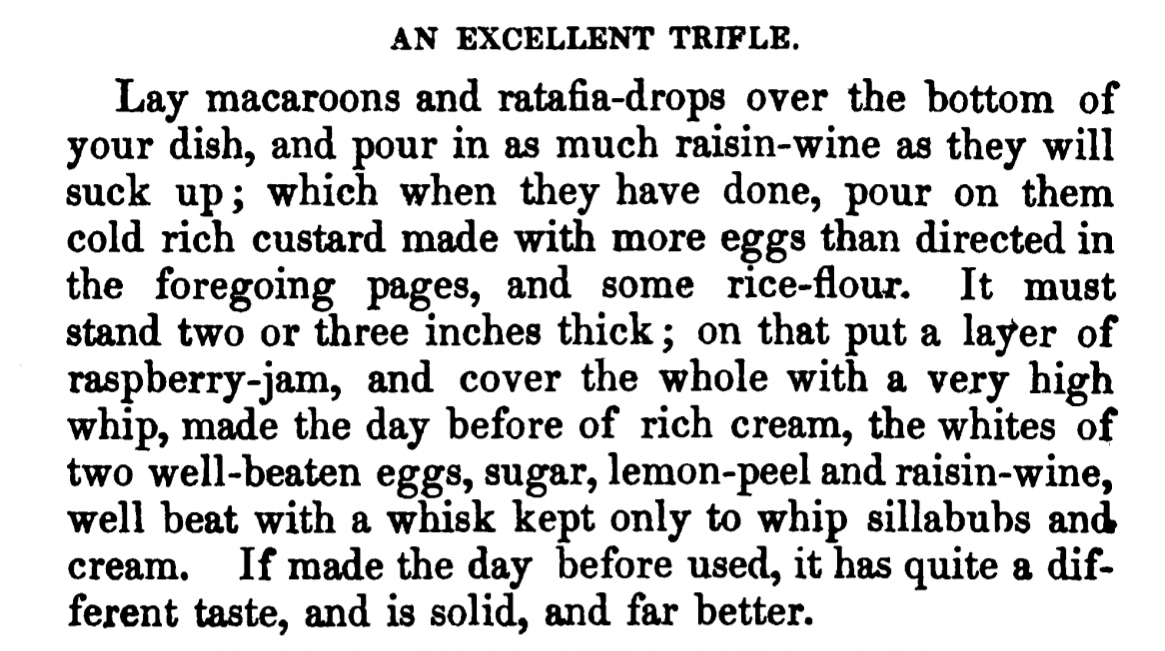 Technology can probably be held responsible for a lot of changes to trifle, custard powder invented in 1837 resulted in a lot firmer layer of custard and became popular during rationing of eggs in the second world war as it did not need eggs and has remained popular ever since. The availability of tinned fruit, easy to make jelly (the concentrated cube arrived here in 1932) and ready made cakes that could be sliced means that there are now more varieties of trifle than there are households although the sherry trifle remains Britain’s most popular ready made trifle. You can see why something that’s relatively easy to make and looks spectacular would make it to the Christmas menu.

I have found so many wonderful historic recipes for your perusal above but my recipe is for Pear & Ginger trifle and it has family folklore for me at least. I think my Nan invented it but my Mum says she found it in a magazine so even our ‘family’ trifle has a disputed origin. Its wonderful and you can make it the easy way or the difficult way but the thing that must always be remembered is the flake for the top even if that results in you begging through the letter box of your corner shop late on Christmas Eve.

This is a really wonderful quick trifle but you could make it extra-ordinary by making the component parts. I’ll leave it up to you but you might already have a lot to do at Christmas …..