In which we discover that it can be unwise to have your name on your belt, that cleverness is important for heroes, the downsides of wagon driving and how a pudding can save or take a life. Today’s story has giants, heroes, magic swords, enchanted ladies, generous princes, a possessed princess, treasure, wicked magicians, monsters and even the devil has a bit part.

Jack the Giant Killer or Death by Pudding
byRachel Mosses

A History of Jack

I discovered that although many elements of Jack’s story are very reminiscent of old English folktales its not as old as you’d think. Some scholars believe that this variation of the story didn’t appear in the oral tradition before it appeared in print in 1711. Others say it was made up by the publisher using older stories but removing King Arthur from the hero role as people were completely bored of him by then.

There is another school of thought which suggests that this story originates from the oral traditions of the Cornish ‘droll teller. The ancient land of Cornwall has a long and glorious tradition of age-old folklore and before books were available wandering ‘droll tellers’ travelled all parts of the county, swapping their tales for food and shelter. Mike O’ Connor has written a wonderful book of Cornish folk-tales which uses a droll teller to frame the stories.

In the original Welsh tales, Arthur reportedly killed several giants. Jack’s killing of Cormoran is strangely reminiscent of Arthur tackling the giant of St Michael’s Mount. In our tale it seems that the king has contracted out the role of giant killing out to Jack. This would account for all those poor wagon drivers having to transport giant heads back to court.

It also supports the suggestion that the story has been rewritten, as people were weary of hearing about the tales of Arthur. The fact that the Mort D’Arthur had been out of print for 75 years when Jack appeared first on paper is perhaps additional evidence that people had tired of those tales. As the Arthurian court frames the story and King Arthur’s son appears in a good light, it does however suggest that people still enjoyed the familiarity of the setting.

Giants have a large influence on English and Celtic folklore. Some suggest that Albion was formed by Giants and that a race of giants existed here before humans did. There is even a story that in 1761 a giant skeleton was uncovered on St Michael’s Mount itself. It sadly mouldered to dust as soon as the air hit it. This remains part of the folklore of the island and was even reported on as late as 1955.

There is no archaeological proof sadly. The majority opinion of the time was giants were evil and ate people, hence why the “Fee Fi Fo Fum” of a giant is still scary. They strangely seemed to have an excellent sense of smell. Every giant in folklore seems to sniff out humans before they are told that it couldn’t possibly be true (see Jack & the Beanstalk). Jack makes sure the Prince is long gone before he releases the giant who gives him the important magic objects.

There is also a starring giant role in the earliest known Welsh prose tale of Culhwch and Olwen. This forms part of the collected tales known as the Mabinogion. In this the hero, Culhwch, has to pursue the daughter of the Chief of the Giants and complete difficult tasks aided by his cousin Arthur (yes, that Arthur). If you enjoy a quest with a boar hunt this one is definitely for you. In all the seriousness, the Mabinogion is wonderful and everyone should read it. It makes you want to have Welsh heritage even when the closest you can get is a Welsh middle name.

A Tale of More Civilised Giants

Not all giants were evil though, there were apparently some civilised ones. At Stokesay Castle in Shropshire there is a legend about two well-heeled giant brothers. The brothers reportedly lived either side of the valley in which the castle is situated – one on View Edge, the other at Norton Camp. They had shared stakes in a great hoard of treasure, which they kept in a vast oak chest-deep in the vaults of the castle. They had only one key between them, so whenever one brother needed to access the treasure they would toss the key to each other  across the valley.

According to legend, one day, one of the brothers failed to aim properly, and the key fell into the dark depths of the castle moat, where it is said to lie to this day. The chest remains somewhere in the vaults, guarded by a giant raven who will not let anybody break it open without the key. These brothers, happy to share their riches with each other, are a far cry from the greedy or violent giant stereotype.

Jack had various magical accessories to help him on the way, it turns out that cleverness and strength aren’t always enough. Although the cap of knowledge, sword of sharpness, cloak of invisibility and shoes of swiftness appear in Norse mythology, there are also a lot of examples in Celtic tales and English ones.

Arthur has his sword that never misses, his scabbard that heals all wounds and his mantle of invisibility. Lugh of the Tuatha De Danann carried the sword Freagarach which could cut through anything. Tom Thumb received a cap of knowledge and shoes that could take him anywhere amongst other magical objects.

In the story, pudding is definitely working in Jack’s favour and not in the Giant’s. Four gallons of pudding is a lot though, 32 imperial pints of pudding. Imagine that, you’d struggle, even if it was your favourite. The pudding here is not the American version that is like Angel Delight, but Hasty Pudding.

I have found several recipes for Hasty Pudding and ironically it existed for much longer in the United States where it found a home in New England. The earliest mention in writing according to the OED is 1598 where it is compared to poor man’s meat. Recipes appear in many antique cookbooks, discussed below but it had disappeared from popular books by the start of the Victorian era.

A warning that the next paragraph is a bit graphic about eating meat. If you have strong feelings about or dislike the idea of offal it might be best to give it a miss. The one after it should be safe enough though.

Originally puddings were savoury, essentially the unwanted bits of animals mixed with grain, fat and then stuffed into their intestines and boiled. Think Haggis, Groaty Pudding (a Black Country delicacy) Black Pudding or White Pudding. They were not rich people’s food but were filling and tasty even if they sound a little unappetising. I liked black pudding as a child until I was told what was in it. I enjoy it again as an adult and feel that dishes like that and Haggis are an important part of Nose to Tail cooking.

The Cloth that Changed Puddings to Sugar & Spice

Puddings changed with the advent of the pudding cloth, as it meant you could now have sweet puddings without the use of any unappetising bits. Savoury puddings still existed but they started to be eclipsed by the large numbers of sweet puddings. Some of these sweet puddings were steamed but others were baked. A baked pudding was a status symbol as usually only the well-to-do had ovens for baking in. However, even poor people boiled their pudding in the same copper used for boiling washing. They would often throw the pudding in with the clothes.

What exactly is a Hasty Pudding?

It seems to have taken many forms but the most common one appears to have a been a type of batter pudding made from flour or oatmeal, milk and eggs cooked until thicker the stove. A bit like this: 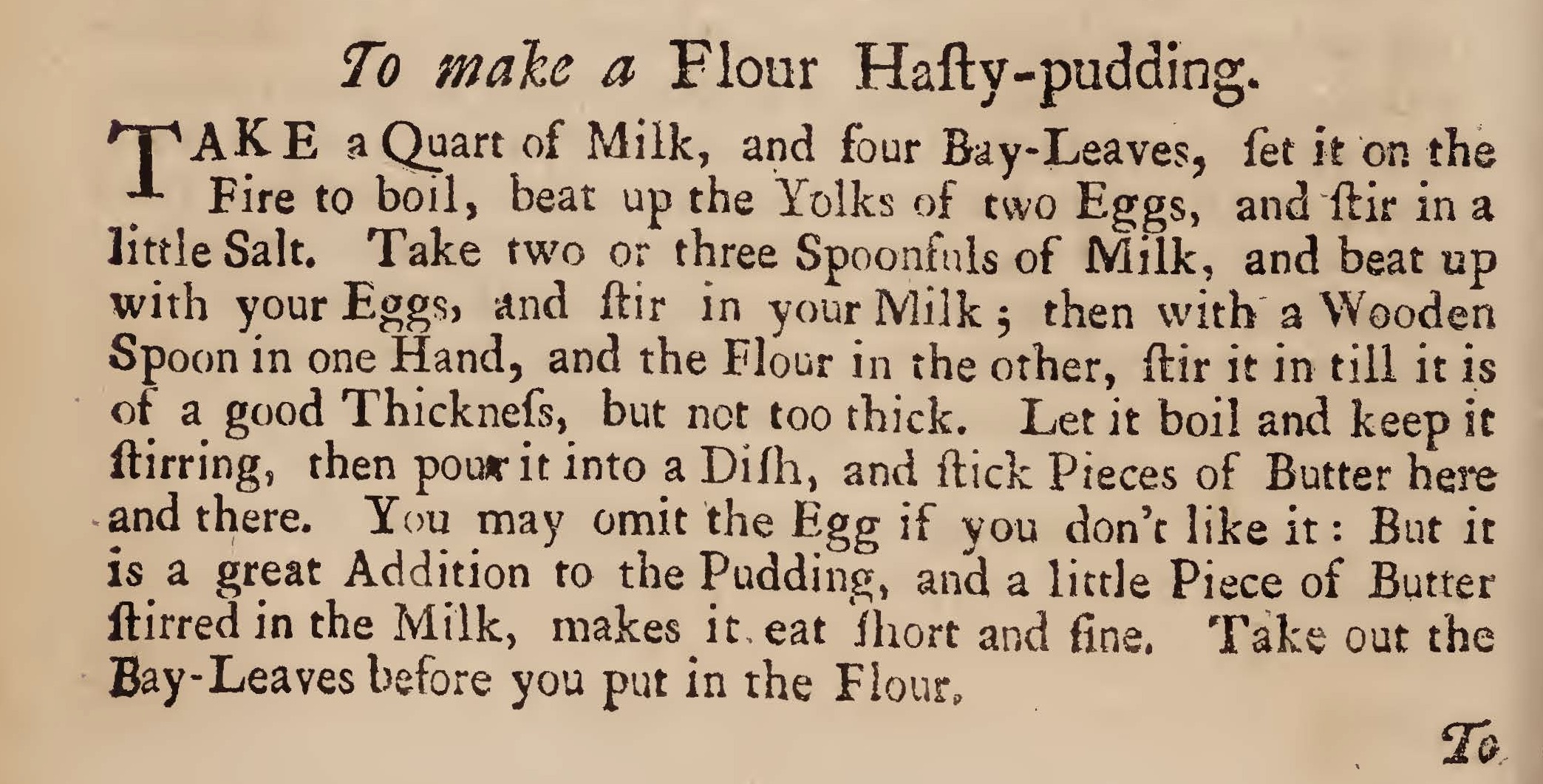 The oatmeal version is what I imagine Jack and the Giant eating for breakfast. I obviously don’t know that the giant wasn’t a gourmet cook, who was spending hours producing the perfect breakfast dish for his guest. The fact that he’d planned to kill him the night before suggests that he probably didn’t make this version from Robert May’s Accomplisht Cook.

“To make a Hasty-Pudding otherways – Grate a two penny manchet, and mingle it with a quarter of a pint of flour nutmeg, and salt, a quarter of sugar, and half a pound of butter; then set it a boiling on the fire in a clean scowred skillet, a quart, or three pints of good thick cream, and when it boils put in the foresaid materials, stir them continual, and being half boil’d, put in six yolks of eggs, stir them together, and when it is boil’d, serve it in a clean scowred dish, and stick it with some preserved orange-peel thin sliced, run it over with beaten butter, and scraping sugar.”

A Note on Pudding from an English Perspective

We might need some context here. Pudding to an English person is not just a dish, it is also the course of a meal. If someone asks what you would like for pudding, they want to know what you would like to finish a meal. They are generally thinking of something sweet but it is not highly unusual to hear that someone is going to have cheese for pudding. It could also easily be some fruit, or trifle or ice-cream. However if you hear someone ask if it is a proper pudding they are probably thinking of something filling, sweet, gently steaming and served with custard. For a people with a language of such infinite variety we do like to make one word do a lot of hard work.

You might have guessed that today’s recipe is pudding related. I could have been mean after all that talk of custard and made it Yorkshire Pudding but I haven’t. Mostly because I don’t want be unkind but partly because unlike most other British people I can’t get excited about it. I don’t hate it, its just not that interesting. My Nan taught me to make perfect crisp high puddings using beef dripping when I was 9 (that being the age that apparently was safe to deal with very hot fat) and then I got over it. Nan was an excellent plain cook and a great teacher so I can still make them, but I just don’t. I’d rather have pancakes if I’m going to the trouble of making batter.

So today’s recipe is Sticky Toffee Pudding. It is both absolutely delicious and has very little history (I thought you might be at pudding history capacity). It was invented by Francis Coulson one of the original owners of the fantastic Sharrow Bay Hotel on the banks of Lake Ullswater in the 1970s. This pudding is a very moist date filled sponge cake with a rich toffee sauce usually served with custard or cream or even possibly ice-cream. My Mum offers all three!

This is a fantastic recipe and the caramel flavours are rich and dark due to the treacle. This is the work of the wonderful Nigella who’s recipe I have tweaked. If you are looking for the original it is in At My Table with many other wonderful recipes.

The Art of Cookery Made Plain & Easy – Hannah Glasse

The accomplisht cook / or, The art & mystery of cookery. – Robert May