As the opening post for a blog, a dish made of lentils makes for a photographic challenge. Not for me the acid bright sharpness of citrus or the mouth- watering pinks of watermelon.  Lentils only look good raw, once cooked to comforting softness they lose any claim to beauty.

While they might be a little less than perfect in the looks department, they definitely shine when it comes to history. Archaeologists have dated lentils from the Palaeolithic to the Mesolithic periods in Greece.  Their earliest domesticated appearance dates from 5,500-5000 BCE.  That’s actual millennia of history.  There were people eating lentils when civilisation had hardly begun and they haven’t stopped since (except for short breaks to start work on creating the next generation or doing a spot of hunter-gathering and then later a touch of farming).  In Rome, Italians still eat lentil soups and stews that their ancient Roman ancestors would recognise (I get bored if I have to eat the same sandwiches for two days in a row so this demonstration of longevity is truly amazing to me).

Not satisfied with being history stars, lentils also make an appearance in fairy tales.  The Grimm version of Cinderella has the poor girl picking lentils out of ashes just so she can go to the ball (spoiler: she gets some help). Lentils are are also said to be the key to a year of good fortune if you eat them on New Year’s Day across Europe and as far away as Brazil. 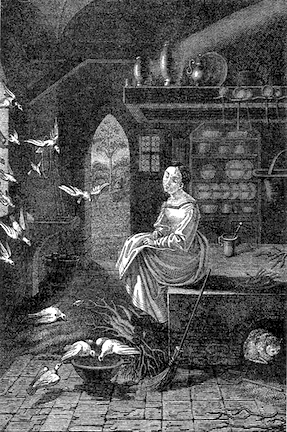 They have also found their way into literature and lore:

“Red lentil soup, although quite seductive in scent, is as simple to make as its name suggests. Marjan preferred to boil her lentils before frying the chopped onions, garlic, and spices with some good, strong olive oil. Covering the ready broth, lentils, and onions, she would then allow the luscious soup to simmer for half an hour or so, as the spices embedded themselves into the compliant onion skins.
In the recipe book filed away in her head, Marjan always made sure to place a particular emphasis on the soup’s spices. Cumin added the aroma of afternoon lovemaking to the mixture, but it was another spice that had the greatest tantric effect on the innocent soup drinker: ‘siah daneh’- love in the midst- or nigella seed. This modest little pod, when crushed open by mortar and pestle, or when steamed in dishes such as this lentil soup, excites a spicy energy that hibernates in the human spleen. Unleashed, it burns forever with the unbound desire of an unrequited lover. So powerful is nigella in its heat that the spice should not be taken by pregnant women, for fear of early labor.
Indigenous to the Middle and Near Easts of the girls’ past lives, nigella is rarely used in Western recipes, its ability to soothe heartburn and abolish fatigue quite overlooked.”
― Marsha Mehran, Pomegranate Soup

“The philosopher Diogenes was eating bread and lentils for supper. He was seen by the philosopher Aristippus, who lived comfortably by flattering the king. Said Aristippus, “If you would learn to be subservient to the king you would not have to live on lentils.” Said Diogenes, “Learn to live on lentils and you will not have to be subservient to the king.”
Anthony de Mello

Lentils are what you might call geographically prolific, appearing in the cuisines of the Middle-East, Mediterranean, South America as well as Asia. The varied climate of these regions results in the different types of lentils we are familiar with.  These are loosely grouped into brown lentils, green lentils and red lentils.  Red lentils are often sold as split lentils which melt down into dahls and soups.  Brown lentils are the most ubiquitous lentils, often just sold as lentils.  Green lentils can often be swapped out for brown lentils in recipes as they have similar cooking times and water to lentil ratios.  French green lentils ( the same lentil variety as puy lentils but not grown in a specific geographical area) are smaller and hold their shape well in cooking.  They have a more distinctive, richer pepperier flavour than brown and green lentils (they also look much prettier uncooked with gorgeous slate blue colours and speckles).  Black beluga lentils are another specialist variety.  They have a certain similarity to caviar when cooked, retaining their black colour and shine.

Not content with their historical status and appearing in many of the cuisines of the world, lentils contain many nutritional benefits. They contain the most protein of any plant based food, have slow release carbohydrates and are a good source of dietary fibre.  They also have good levels of folate, tryptophan, manganese, iron, phosphorous, copper, vitamin B1 and potassium. These are all excellent in recommended daily doses but that isn’t even the best bit. When you consider that they are overflowing bundles of nutritional happiness, they are also astonishingly cheap (even the expensive varieties are good value).

Lentil dishes I have known and loved ….. 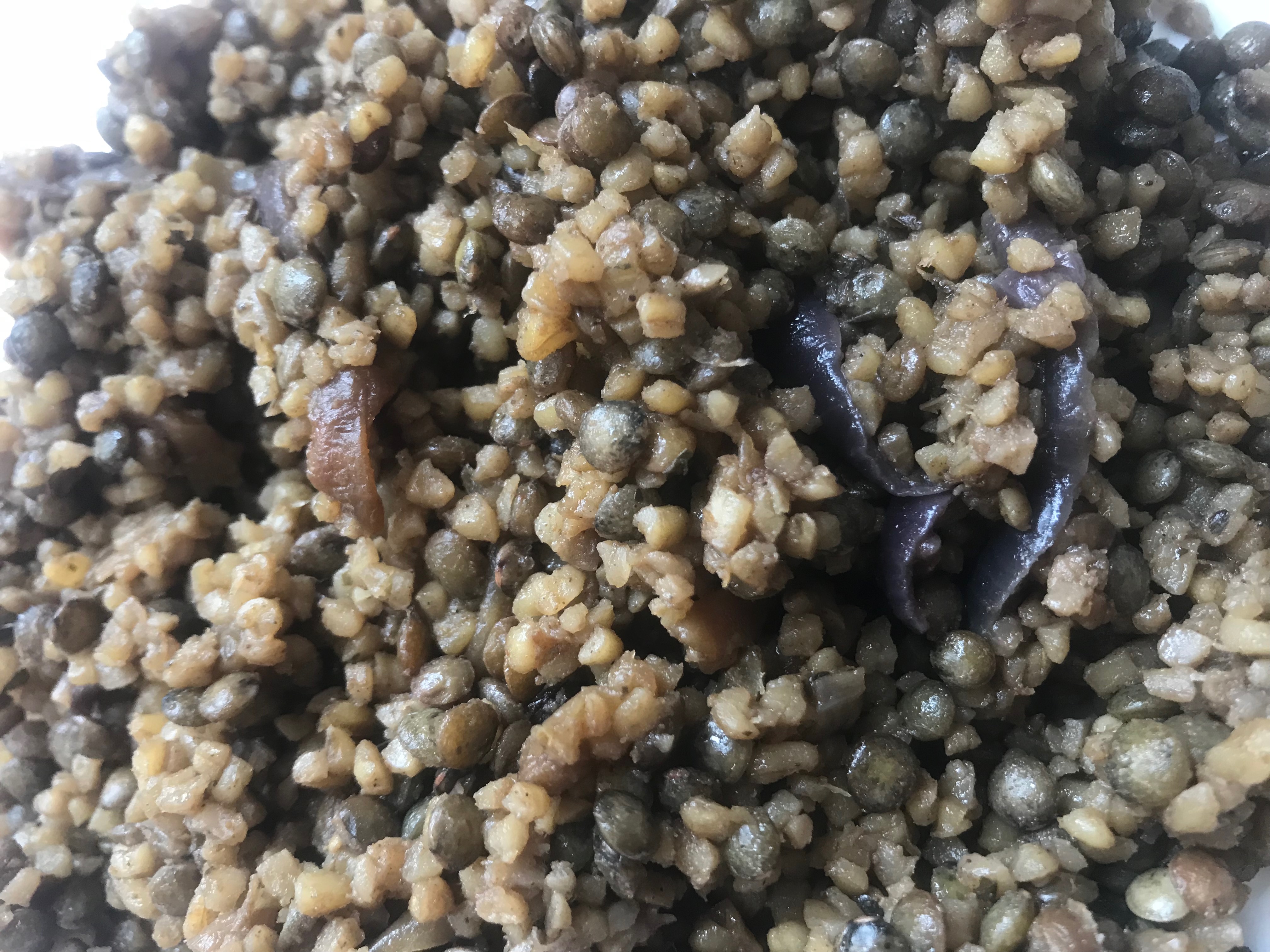 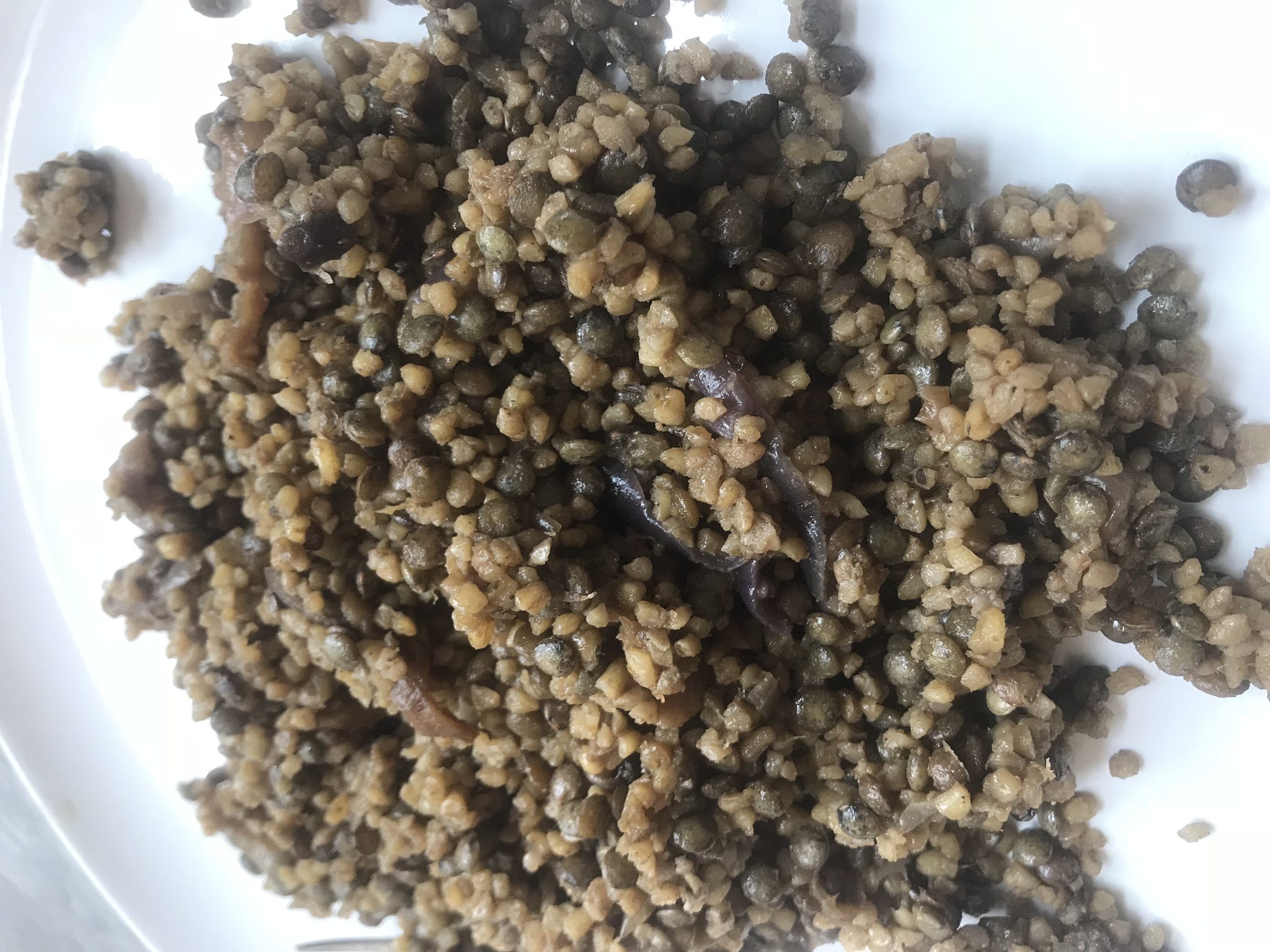 This moreish, filling, yet frugal dish has many variations, 5 in Lebanon alone. It has been eaten for centuries (first mentioned in 1226 in Kitab al-Ṭabīḫ – The Book of Dishes) across the middle eastern world and by Sephardic Jews but is better known as a lentil and rice dish. However in Syria and Palestine and two variations of the Lebanese 5 it is made with bulgar wheat instead of rice and I prefer this version. It keeps better in the fridge for leftover lunches and I love the nuttiness of the bulgar. The addition of spices is definitely not part of the ancient recipe but I crave the warming flavours they bring. This is quite a speedy dish except for the caramelised onions, I tend to make gigantic batches and freeze in mujadara size portions. I use my Le Crueset style (read Sainsburys own) cast iron pot in the oven and this method from https://thecookful.com/how-to-caramelize-vidalia-onions/. I use normal yellow onions as we don’t have vidalia onions here and i find the big spanish onions too sweet but you can try whatever suits you.

The list of things that taste good with this is endless but I’ve enjoyed halloumi (everything is better with halloumi), hummus, spiced chickpeas, poached eggs, bhaba ganoush, roasted vegetables of pretty much any sort. It’s a brilliant background dish for meat too, particularly lamb as it’s earthy goodness brings out the sweetness of the meat. 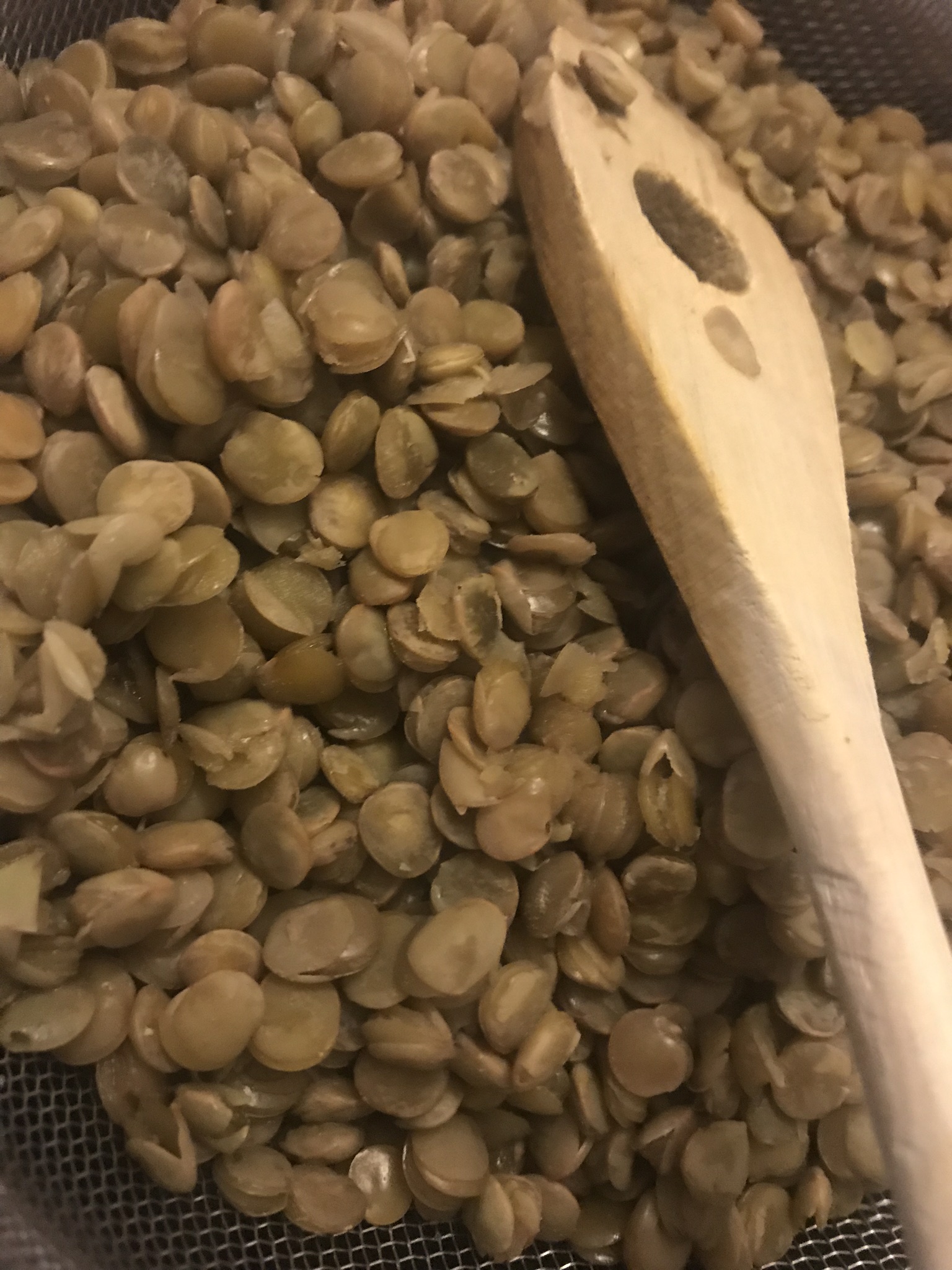 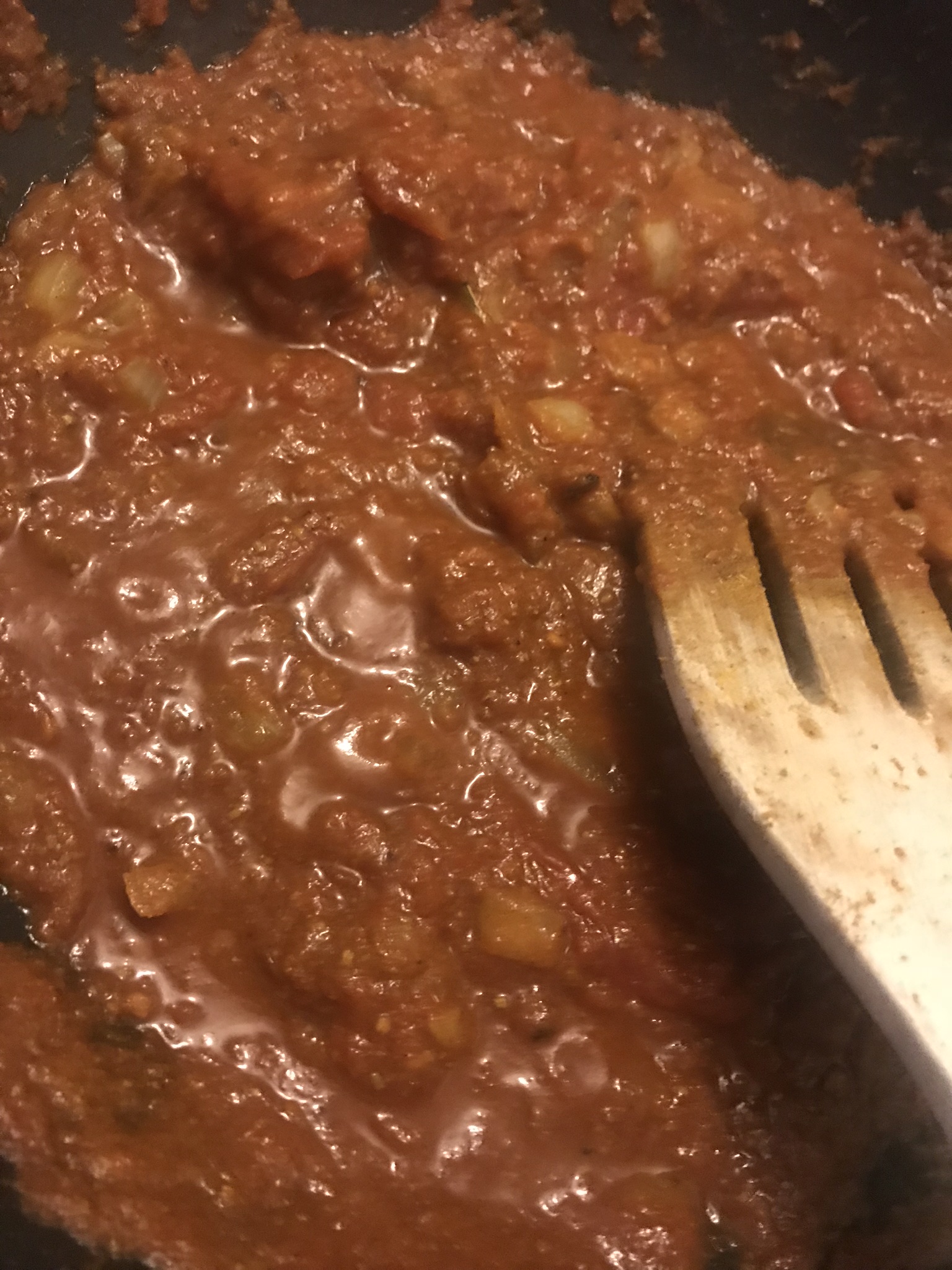 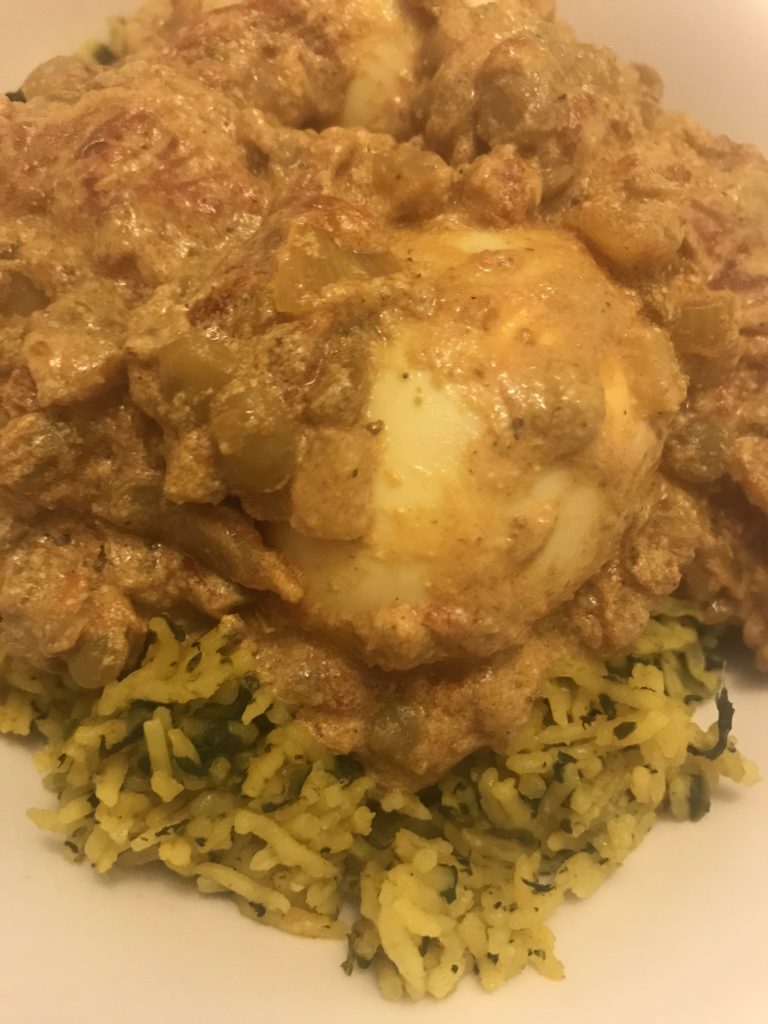 This sounds like something from a 1970s whole food cookbook but it is surprisingly rich and tempting whilst spending very little time and money. The lentils collapse into the sauce to an extent resulting in a thick and creamy sauce with a fresh tang from the yoghurt. I’m not the biggest fan of coriander so I left this out but I imagine this would be great if its a herb you enjoy. I serve mine with turmeric and spinach rice and it serves 2 very generously.

This is great with rice or vegetables (particularly spinach) or even both. Serves 2 very generously.

I can’t express how much I adore Nigel Slater, I fell in love with his recipes reading Real Good Food whilst recovering from a tonsillectomy and have every other book he’s written. His passion for a few simple good ingredients is infectious and this dish exemplifies it. Eating this in the depths of winter makes a cold grey world become warm and multi-coloured even if just for the space of half an hour. It is comfort food without the guilt (because carrots and lentils, no-one needs to mention the cream) and without a large price ticket (I must admit to sometimes using defrosted frozen smoked haddock when there is more month left than money and it still tastes good). The lentils soak up all the goodness, becoming rich whilst retaining an earthy bite and make this a substantial dinner.

This should serve 2 but often I buy a smaller piece of haddock and keep everything else the same, and it is a large comforting meal for one!