Kebabs, so delicious yet so much controversy. Do you think of elephant leg, the late night scourge of the high street, sadly grey yet so appealing after a few too many drinks? Or perhaps a shish kebab with its crispy nearly burnt edges and indigestible undercooked pepper slices? Is shawarma more your thing? Moist and juicy with garlic sauce and chilies?

Kebabs have a long history, the idea of a sword (Turkish word şiş) as a cooking tool appears first in the 11th-century Diwan Lughat al-Turk, believed to be authored by Mahmud of Kashgar. The Turkish word kebap derives from kabab which means roasted meat in arabic and appears in Turkish texts from the 14th Century, notably in in Kyssa-i Yusuf (the story of Joseph), though still in the Arabic. Şiş became shish in English coupled with the Turkish word kebap – hence shish kebab.

Although kebabs appear all over the Middle-east, the Caucasus, India and the Mediterranean in many forms, there aren’t many that would argue that Turkey holds the crown. Gaziantep (considered the culinary capital of Turkey) boasts 30 types of kebab alone. The four most popular kebabs come from the south eastern region of the country: classic shish kebab, adana kebab, urfa kebabi, Cop şiş. Adana kebabi and Urfa kebabi are named after the cities that they come from. Adana is a spicy kebab rich with red pepper and other spices whereas Urfa kebabi are milder flavoured with garlic, onion and oregano. Cop şiş is made from the leftover trimmings of lamb and fat from making the perfect cubes of lamb for shish kebab. These trimmings are pounded with garlic and tomato and left to marinate with olive oil and oregano. They are then pushed onto a skewer and cooked very quickly on a hot grill leaving crisply browned meat full of flavour. They are usually served before the main meal to wet the appetite.

Turkish kebabs are also famous outside of the country: The Doner kebab is the original of the turning kebab that Turks have made so popular all over Europe, a vertical rotisserie being invented in 19th century Ottoman Empire. There is some controversy about who invented it in its popular form but, safe to say it has become a firm favourite. Ishkender kebab is another popular kebab dish from Bursa, named after Iskender Efendi himself (who claims to have invented the doner in the 1800s). Shavings of doner meat are added to Turkish flatbread, similar to pita, that’s been cut into small squares and entire dish is doused with melted butter, creamy yogurt, and a tangy tomato sauce. Kofte kebabs of minced meat and spices have also been exported successfully.

According to folklore the predecessor of these kebabs was invented by Ottoman knights on battlefields skewering meat with their swords and cooking it over open fires. The etymology of the name for the common shish kebab would suggest there might be some truth in this. Claudia Roden in Food in Motion: The Migration of Foodstuffs and Cookery Techniques, Volume 1 conjectures that there is a strong link between charcoal grilled foods of this type, large Muslim populations and those areas influenced by Islam.

I have to confess to loving kebabs, even the elephant leg kind but I’m more likely to cook them at home now to share on the sofa in front of the television on a Friday night, preferably with a cocktail. I’d like to share my two favourites with you. My sort of kofta kebabs and oven chicken shawarma. The first I have developed over many years with lots of research (best kebab eating excuse ever), the second is adapted from the NYT Times recipe.

I’d like to suggest that you can swap out the lamb for something else but I can promise it won’t be as good. It might be contrary to current thinking but you need the fat in these for texture as well as flavour. I spent years trying to make kebabs as good as I could get from restaurant and takeaways but there was always something missing. Then I tasted some of the best kebabs I’d ever had in a tiny Kurdish restaurant a stone’s throw from Edinburgh Castle and I thought I’d ask on the off chance they might be prepared to share their secrets. Yoghurt. That’s it: yoghurt. About 4 tablespoons to a pound of lamb and a few other ingredients and you too can have the kebab of your dreams at home. I am assuming here that other people dream about kebabs, it can’t just be me.  I serve ours with roasted aubergine with cumin and onion à la Diana Henry  topped with pomegranate seeds and raw red onion, dry fried halloumi, hummus, garlic sauce, chilli sauce and neon pink turnip pickles. A Friday night feast. 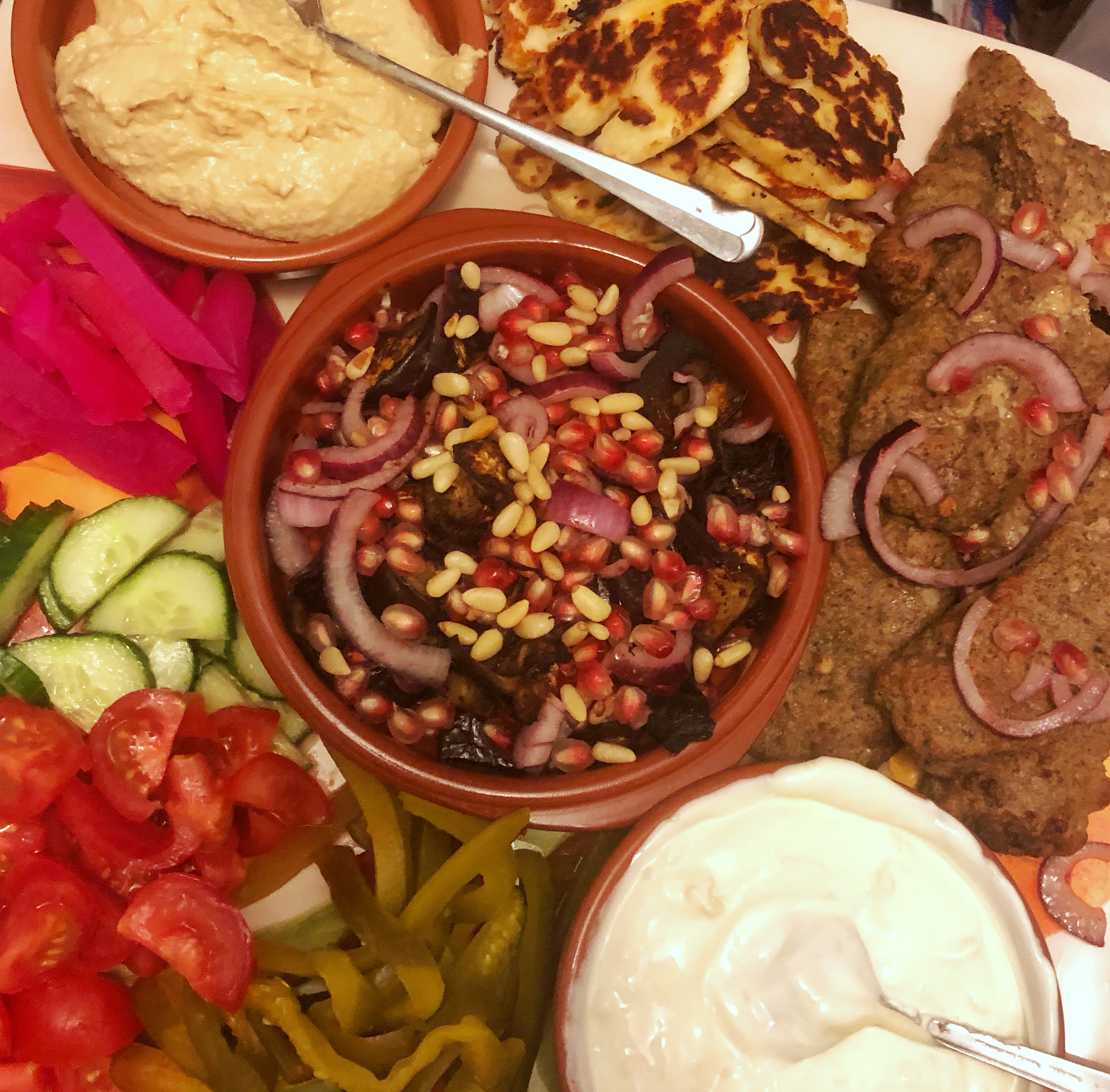 This is my favourite chicken kebab and is the closest I can get to good shawarma without traveling for at least 45 minutes and queuing for a table.  Its adapted from a New York Times Food recipe and I’ve made it a few too many times making a few changes every time.  I’ve decided I’m there now.  The leftovers are great with pilau rice and salad in a sort of middle-eastern burrito mash-up with big wraps.  We eat it with pitta bread, garlic sauce, hummus and salad but you could serve it New York street cart style with slightly sweet yellow rice.  Feta would be nice too. 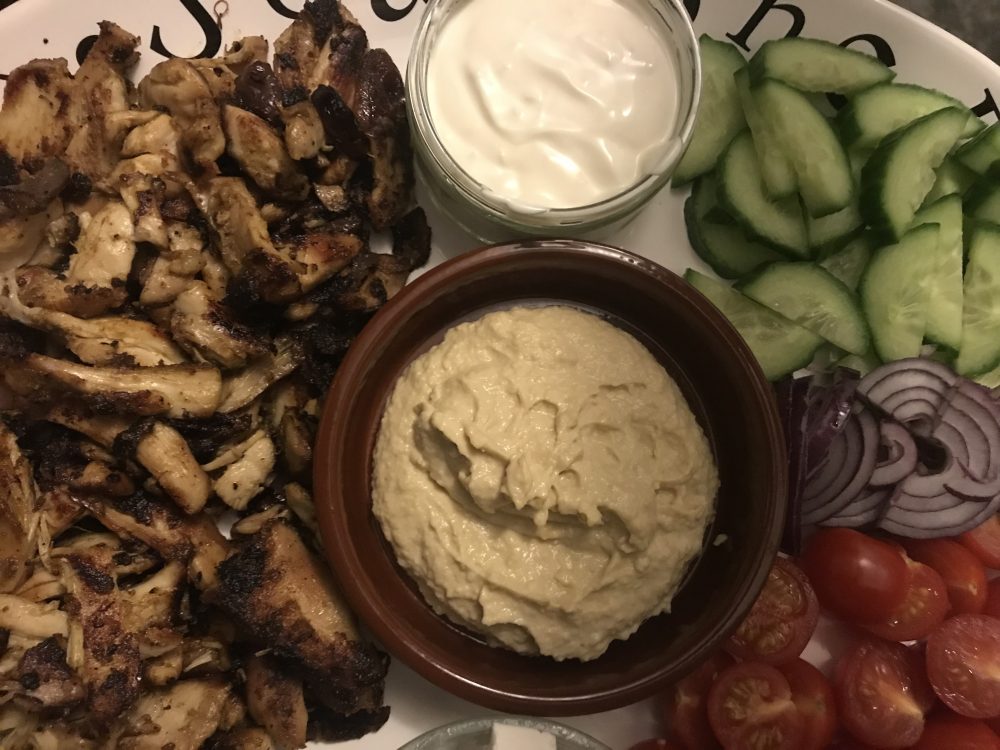 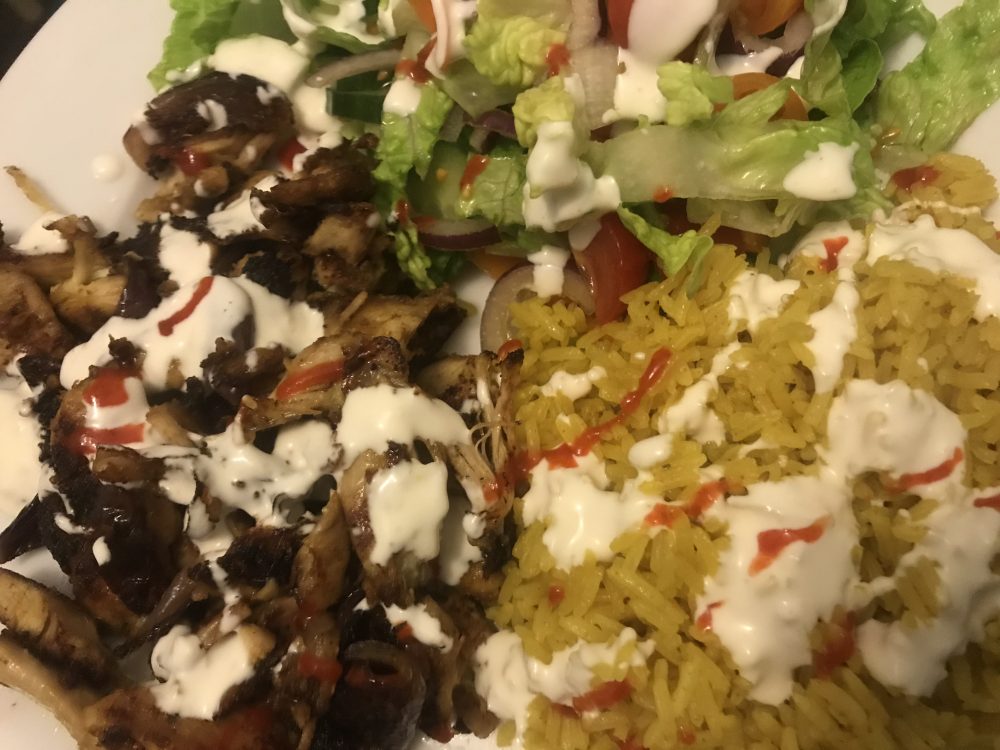 If you want this on a weekday evening I mix the marinade ingredients the evening before, store in the fridge and then add the chicken to the mixture in the morning and pop back in the fridge to marinade whilst I'm at work.

References and other things to read