I love Georgette Heyer, I even love her more than Jane Austen, mostly because her books are one of the places I know I will always find comfort.  No matter how much I admire her, I’ve never yet taken an Austen to bed.  I was so delighted when I found out how much other people love Georgette Heyer too. I was reading the amazing standard issue website (their new format as a pod cast is just as fabulous) when I came across this article: http://standardissuemagazine.com/arts/i-love-georgette-heyer/. So many reasons to adore her.

I’ll be referencing her mouth-watering descriptions of food in this post.  There are so many, I had to restrain myself to just a few examples.  This post has taken me nearly six weeks to write, mostly because I ended up looking through volumes to find examples and then re-reading all the novels.  Then I ended up down a rabbit hole of research into Georgian England and the wondrous world of historic cookbooks.  The world is blessed with people who give up their time to scan in thousands of pages of history and then provide it to us for free.

I should warn you now.  If you’re not already hungry, you will be very soon.

Food is just one example of Heyer’s meticulous attention to detail in her research.  The food in her novels helps to elucidate the social positions of her characters.  In Georgian England, especially the Regency period, food and the manners around it were a key indicator of social status.  Dinner parties were the preserve of the wealthy but the way dinner was served would seem very strange to us.  Once seated according to status (male/female mix became more important later during the period) the first course would be served.  This consisted of upwards of 8 dishes all placed in a particular place on the table.  You ate from the dishes around you and weren’t expected to try everything. If there was something that particularly took your fancy on the far side of the table you could try and catch the footman’s eye.

‘The cod’s head was removed with a loin of veal; and the soup with a Beef Tremblant and Roots. Between them, side dishes were set on the table: pigeons a la Crapaudine, petits pates, a matelot of eels, and a fricassee of chicken.  The second course consisted of a green goose, two rabbits, a dressed crab, some broccoli, some spinach, and an apple-pie.’ – Cousin Kate

The layout of the dishes formed part of the menu: 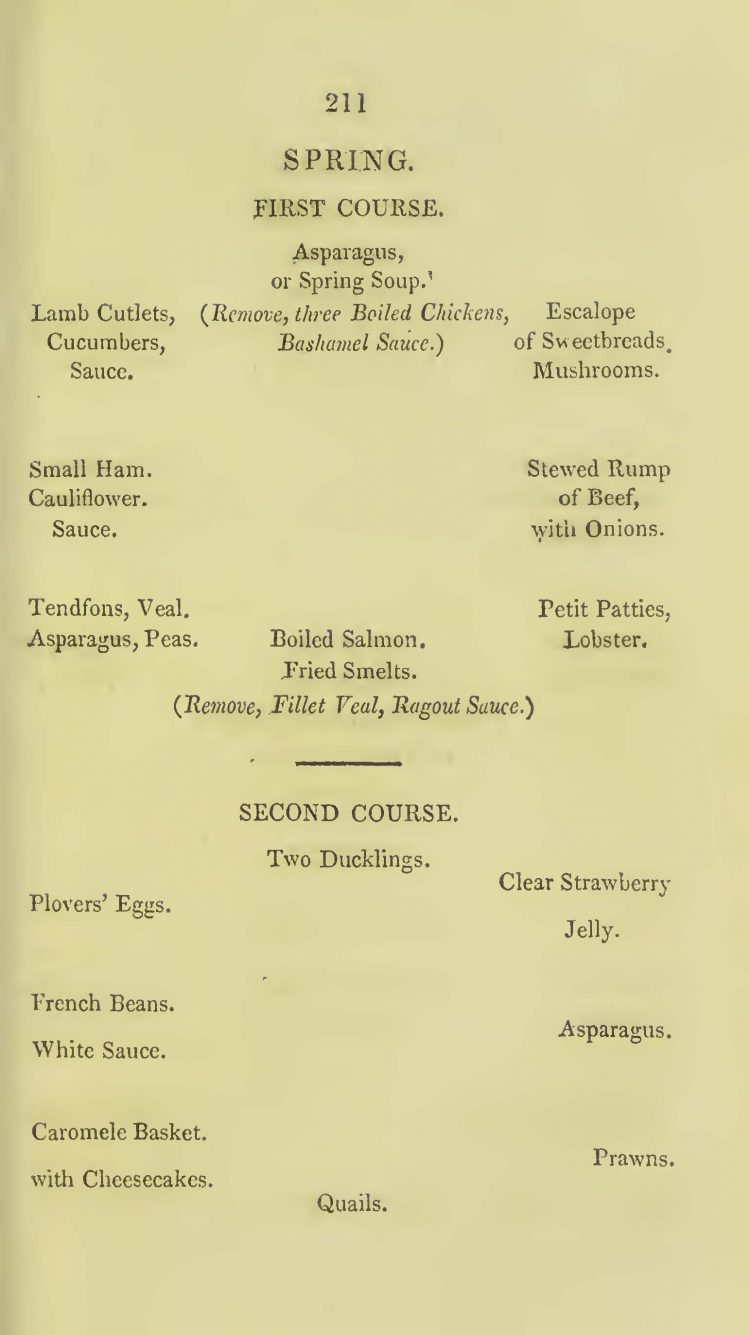 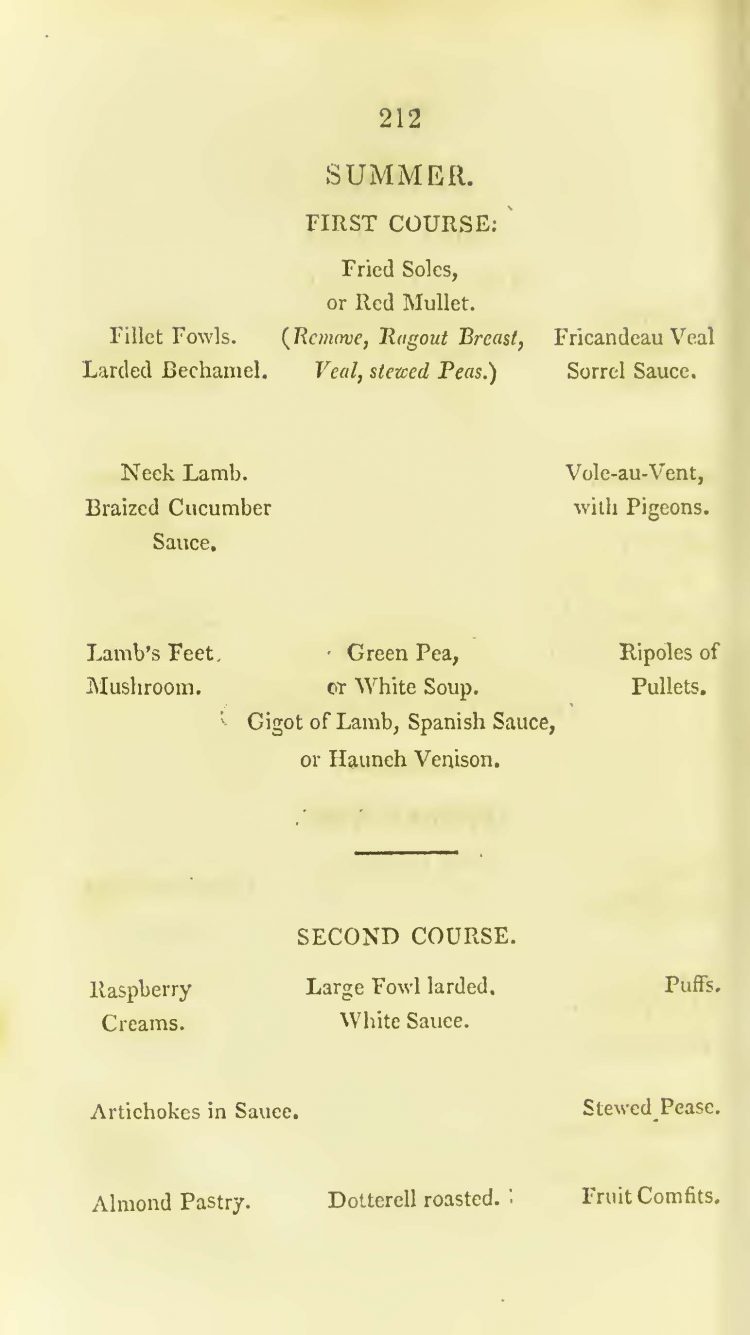 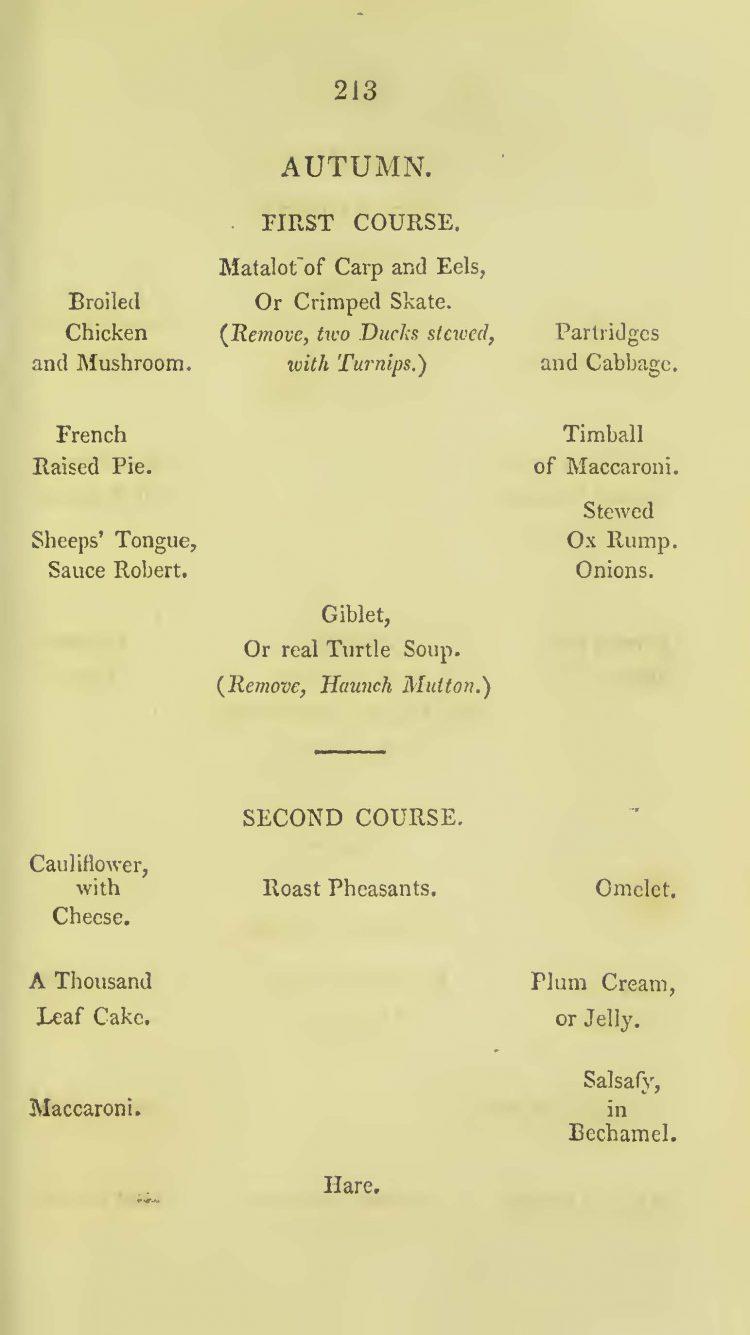 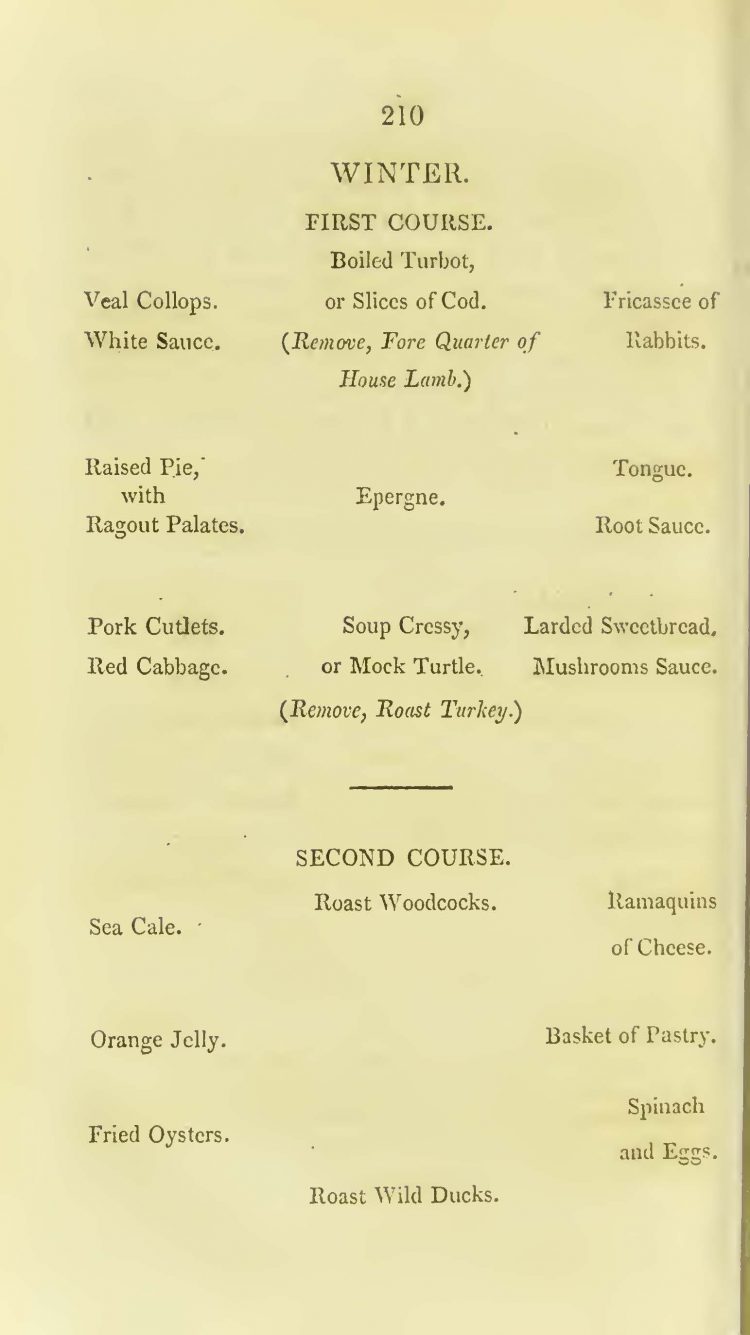 During formal dinners it was frowned upon to talk across the table and if your partner wasn’t talkative the dinners could be long:

‘She had nothing to do but to admire her own arrangement of flowers in the centre of the table, while disposing of her portions of soup, fish, and sucking-pig. When the second course made its appearance, with its plethora of vegetables, jellies, fondues, blancmanges, and Chantilly baskets, she refused to allow her aunt to serve her from the larded guinea-fowls which graced the head of the table, or Sir Timothy to tempt her to a morsel of the ducklings set before him, and ended her repast with some asparagus.’ – Cousin Kate

Often you were unable to talk across the table due to overly elaborate table ornaments as discussed at length in the Quiet Gentleman:

‘”Let me make it plain to you, Miss Morville, that I will not sit down to dinner with that thing in the middle of the table!”

“You could not, for now that the table has been reduced, which, I must say, was a very good notion, there is no room on it for the epergne. But now and again, I daresay, you will wish the table enlarged to accommodate more persons, and the epergne can be set upon it for the occasion. It is certainly very disagreeable to be obliged to crane one’s neck to see round it, when one dines informally, and it may be thought allowable to converse with persons seated on the opposite side of the table; but on more state occasions that would be a sadly ill-bred thing to do, and the epergne need be an annoyance to no one.”

“I hesitate to contradict you, ma’am, but it must always be an annoyance to me,” said Gervase.

“Not,” said Miss Morville, “if it were turned so that you were not confronted by a snarling tiger.”’ 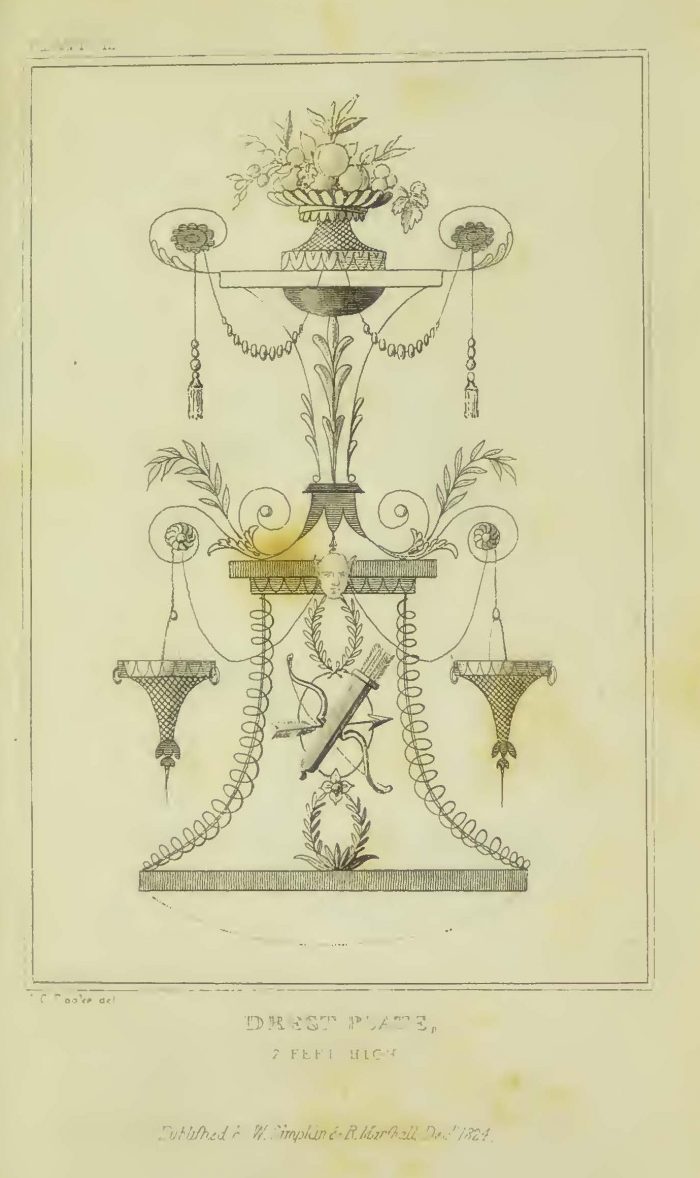 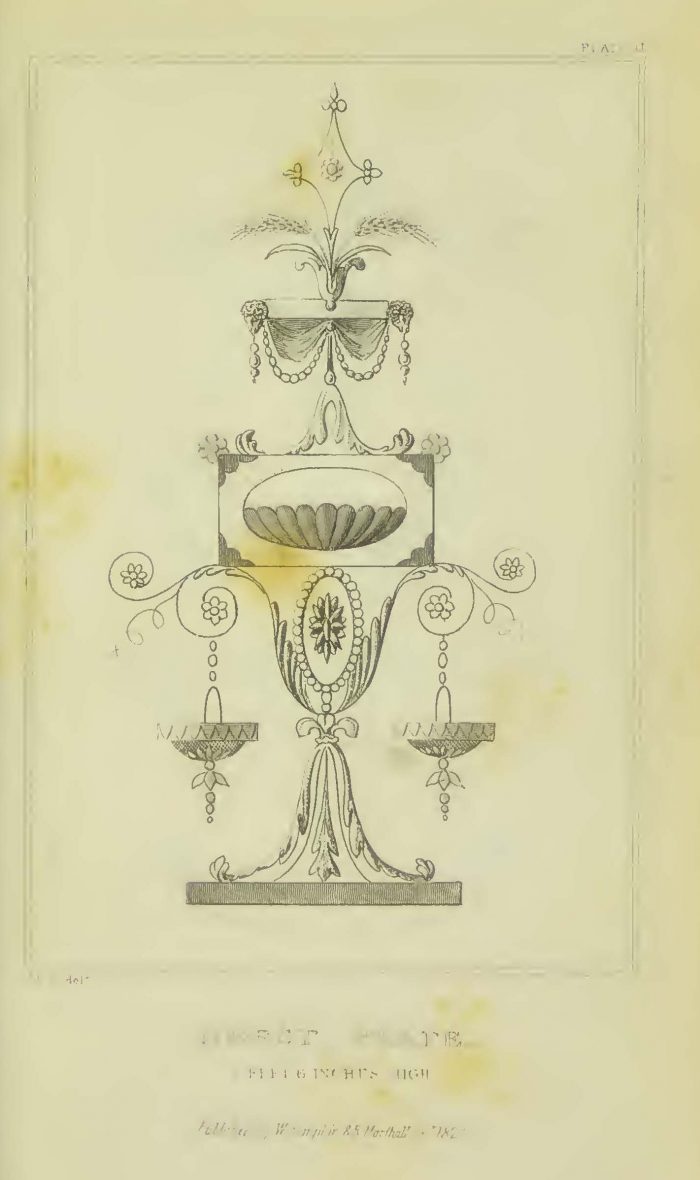 Foods served at other social occasions was in theory less formal but the decorations and the items served were more visually appealing including incredible pastry sculptures:

‘There were only a dozen persons present, but nothing could have exceeded the display of plate, or the splendour of the refreshments. The regalia on the sideboard of jellies, creams, and pies made Lydia open her eyes; and she afterwards insisted that she had counted eight dishes a side on the table. The Usselbys might exchange significant glances, but Mr Charles Oversley, forgetful of the indifference befitting a man of mode, ejaculated, as his eyes fell on the table already spread with pies, pates, capons, a glazed ham, and fruit, creams, and jellies past counting: “By Jupiter, this is something like!”’ – A Civil Contract 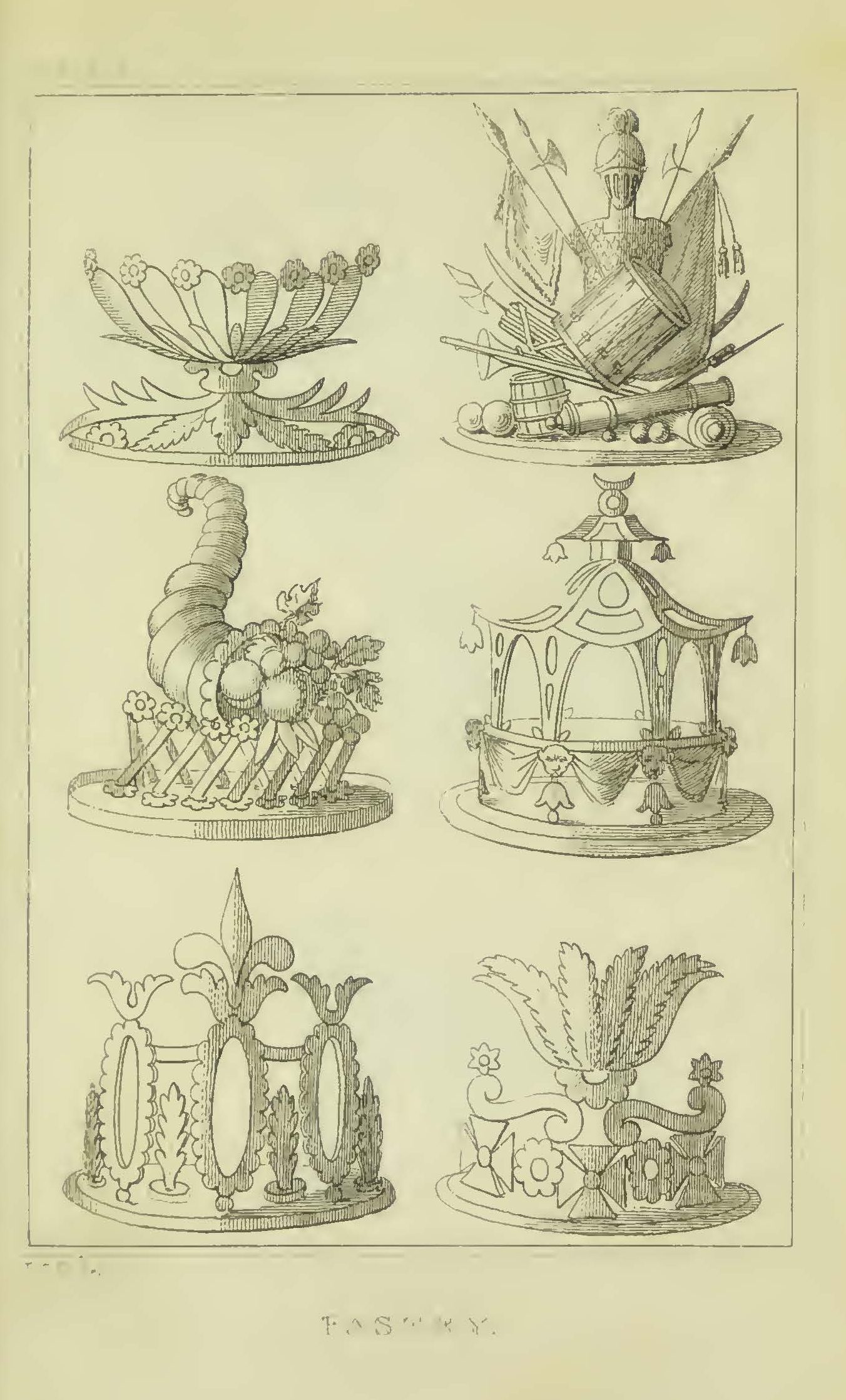 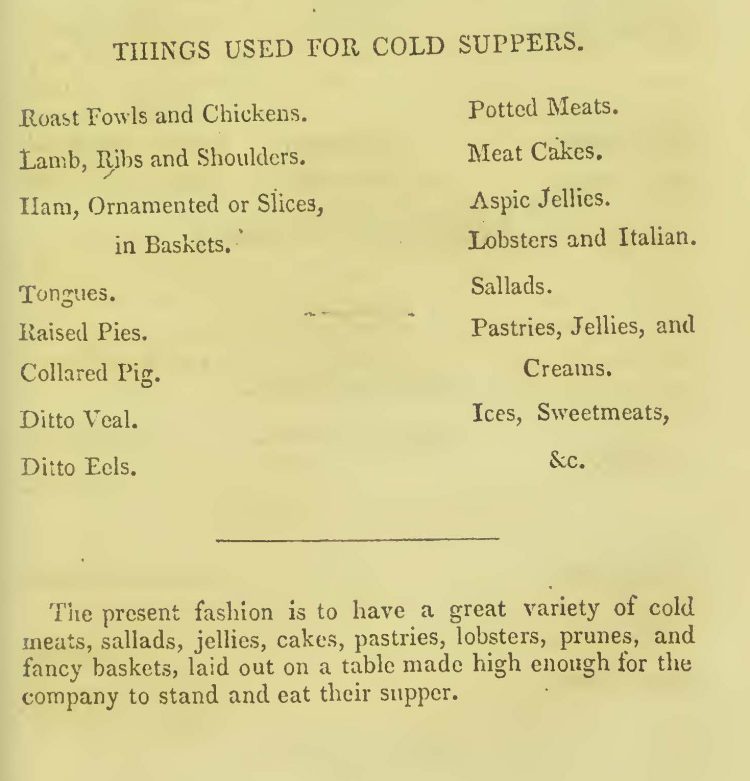 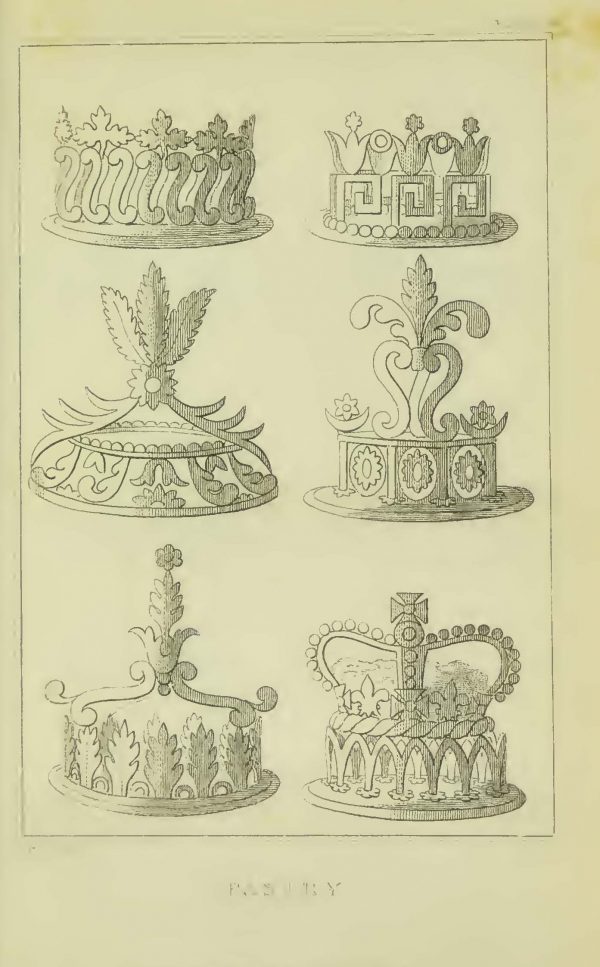 It was not fashionable to be very interested in food but the skill of your cook could only add to your consequence:

‘He knew quite as well what to offer a very old lady as how to serve up a grand dinner of two full courses, consisting of half-a-dozen removes and upwards of thirty side dishes. The Dowager, revived by a soup made with fresh peas, allowed herself to be persuaded to try a morsel of turbot; followed this up with several morsels of a delicate fawn, roasted whole, and served with a chevreuil sauce; and ended her repast with a dish of asparagus, cut and delivered by the kitchen-gardener a bare ten minutes before Mr Dawlish was ready to cook it. This was so succulent that she was moved to compliment Kit on his cook.’ – False Colours

During this period dinner was however the main meal of the day, luncheon or nuncheon barely existed and breakfast had become a light meal.  Wealthy ladies of leisure, in fact, rarely got up for breakfast and enjoyed toast and tea in bed. Several of Heyer’s male characters were however, extremely interested in their food and it is quite unbelievable to consider how much they could eat in a meal:

‘He partook lavishly of every dish and was so much moved by the excellence of the Davenport fowls, stuffed, parboiled, and stewed in butter, that he sent a complimentary message to the cook and congratulated Carlyon on having acquired such a treasure. By the time he had worked his way from the Hessian soup and ragout which began the repast through a baked carp dressed in the Portuguese way, some beefsteaks with oyster sauce, the fowls, and a floating island, with a fruit pie as a remove, he was so far reconciled to his nephew’s death as to be able to recount three of the latest good stories circulating town and to confide to Carlyon as he ecstatically savoured the bouquet of the port, that he really could not agree with his old friend Brummell in deeming it a wine only fit for the lower orders to drink.’ – The Reluctant Widow

‘They have a way of cooking semelles of carp which is better than anything my Alphonse can do,’ he said impressively. ‘You cut your carp into large collops, you know, and in a stew-pan you put butter, chopped shallots, thyme, parsley, mushrooms, and pepper and salt, of course—anyone knows that! But at the Clarendon something else is added, and devilish good it is, though I haven’t yet discovered what it may be. It is not sorrel, for I desired Alphonse to try that, and it was not the same thing at all, I wonder if it might be just a touch of chervil, and perhaps one or two tarragon-leaves? I thought I would have it removed with a fillet of veal. We must have quails: that goes without saying—and ducklings; and nothing beside except a few larded sweetbreads, and a raised pie. And for the second course just a green goose, with cauliflowers and French beans and peas, for I know you don’t care for large dinners. So I shall add only a dressed lobster, and some asparagus, and a few jellies and creams, and a basket of pastries for you to nibble at.’ – False Colours

The way that men and women ate when alone with their own gender was very different to how they ate together.  Ladies were served lighter, more delicate dishes:

‘Dinner was served in my lady’s private parlour: not a large dinner, but one of great elegance, beginning with a soup, going on with lobster, dressed in a sauce known only to Jacquard, reaching its climax in a capilotade of ducklings, and ending with a dish of peu d’amours. Miss Malvern, abandoning herself to the flesh-pots, enjoyed every mouthful.’ – Cousin Kate

Gentlemen however, were much more inclined to informality and heartier meals:

‘Mr Templecombe’s notion of a picnic included plovers’ eggs, some fillets of salmon, with a caper sauce, a blanquette of fowl, and a raised pie. There were no kickshaws, by which term Mr Templecombe scornfully described fondues and trifles and jellies.’ – Cousin Kate

I could and should have stopped some time ago but I couldn’t resist these descriptions of another age.  The foods of this time sound so tempting that it seemed unfair to deprive you of just one more paragraph.  The foods of the other classes of society at this time are the subject of another blog with more fact and less fiction but sometimes you need a little escapism with your history. 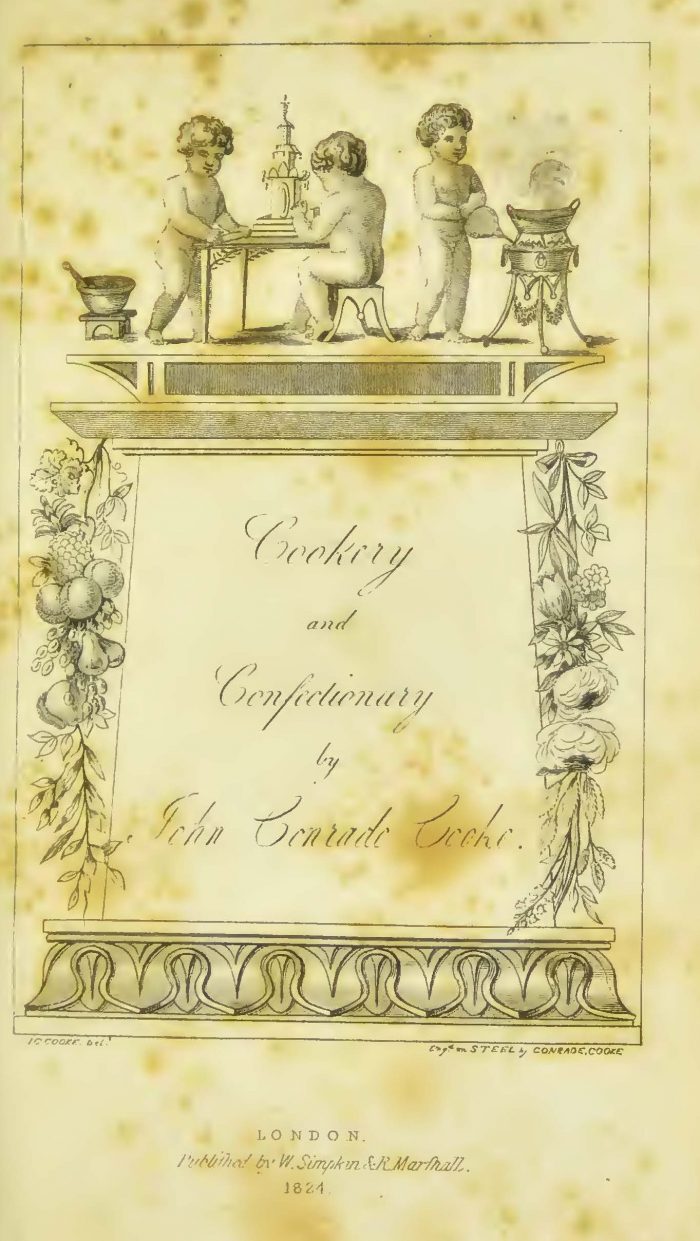 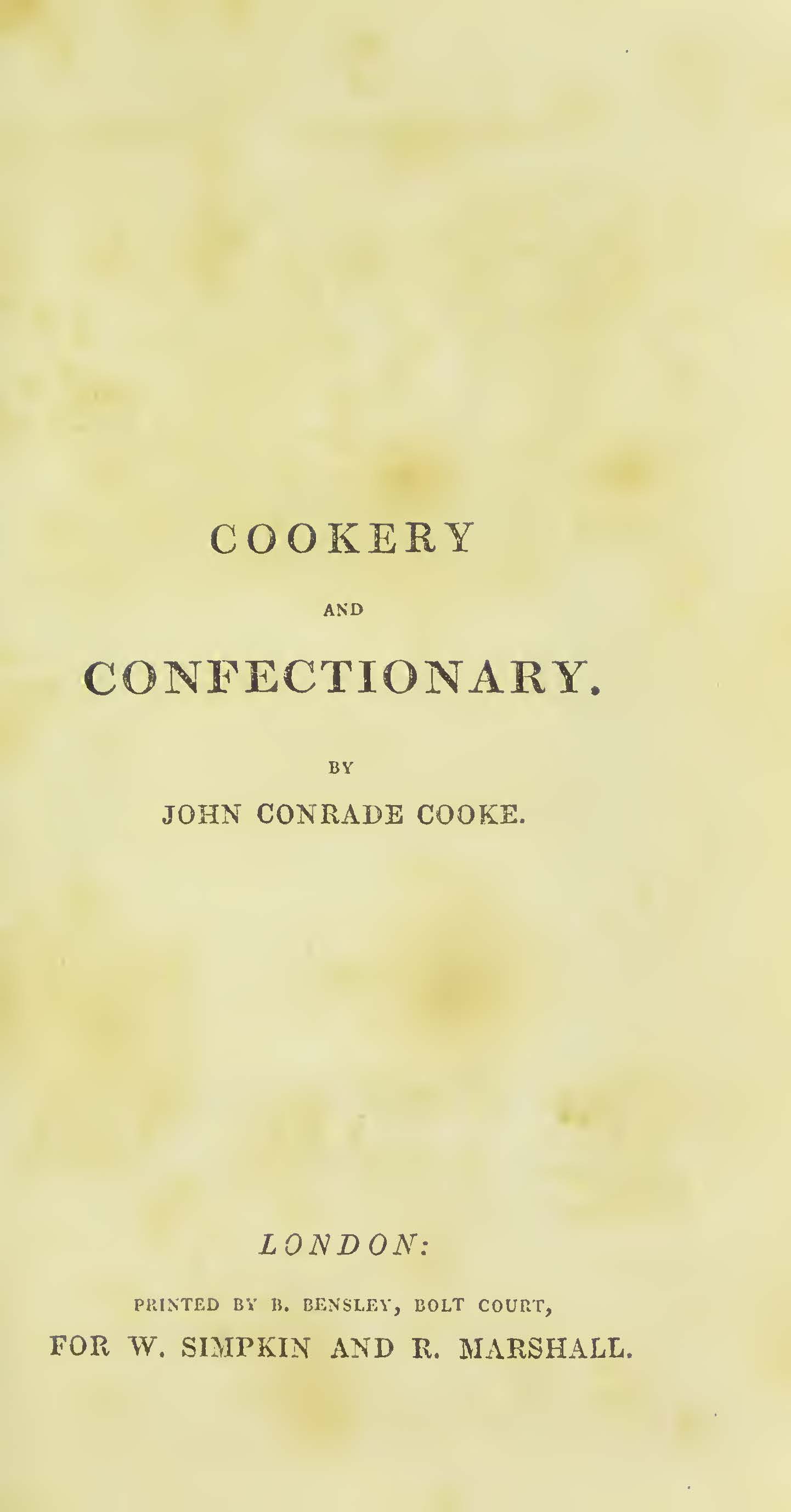 To read more on this subject, fact or fiction see below:

All of Georgette Heyer’s Regency novels which are full of joy, wittiness and excellent heroines.